Microsoft intends to give Office new standard fonts – all from the cloud?

[German]Microsoft is currently looking for a new standard font for its Office modules. At least that is what emerges from a tweet and a blog post from 28.4.2021. However, the whole thing raises more questions than it answers. If my gut instincts aren't deceiving, this is another step toward the cloud. Here's some information and thoughts on it.

The topic came to my attention yesterday, but I didn't plan to take it up on the blog at first. But Bolko's German comment in the article on PDF security made me rethink. 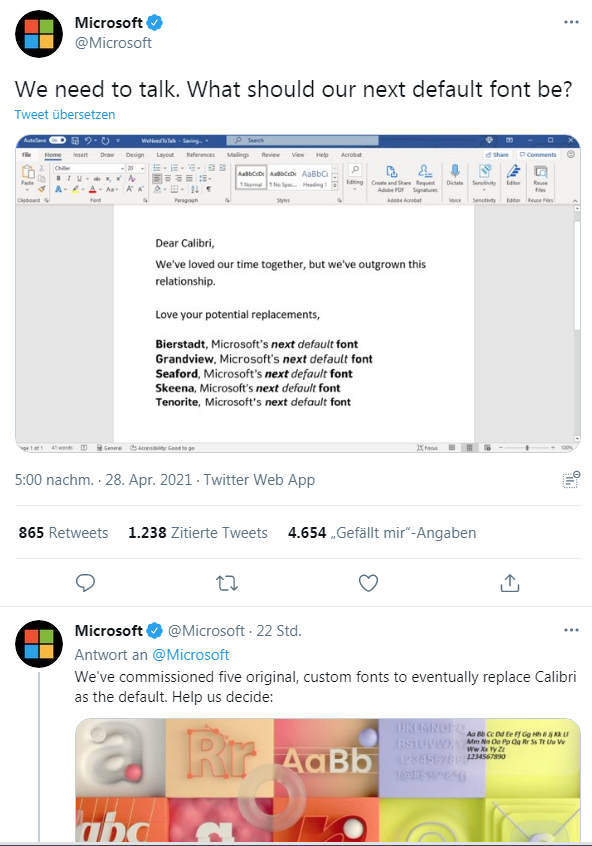 Microsoft has provided five special fonts for the user to choose from. In a longer blog post, Microsoft describes this request. Calibri has been the standard font for everything to do with Microsoft since 2007, writes Redmond. This font has replaced Times New Roman in Microsoft Office. Now the developers think it's time to go in a new direction. To that end, Microsoft we commissioned five original custom fonts (Bierstadt, Tenorite, Skeena, Seaford, and Grandview) to replace Calibri as the default.

Microsoft says that the font someone likes best, but doesn't select as the next default, will remain available alongside Calibri and other favorite fonts in the selection for fonts in Microsoft 365 Office apps and beyond.

Is it heading to the cloud?

Microsoft  wrote in its blog post that the five font families would be available in all Microsoft 365 apps from the cloud. That set off a red light for me – assuming the whole thing holds up at the end of the day and the fonts have to be loaded from the cloud, yes, that has a rat's tail of implications.

Bottom line: it's still in the selection process, after all – but I'm not sure I like the direction it's going. If it comes down to the cloud as a font bunker, that would be a no-go. And all because some designer at Microsoft thinks something new is needed? How do you guys see it?

2 Responses to Microsoft intends to give Office new standard fonts – all from the cloud?