[German]Users who block various telemetry features, including the Windows Experiments feature in Windows 10, for privacy reasons will lose additional options offered by the operating system. It has just become known that a disabled Windows Experiments feature will also block the Known Issue Rollback (KIR) introduced in Windows 10 version 2004. Specifically, the required fixes can no longer be applied. Here is some information on this issue.

The Known Issue Rollback (KIR) feature was introduced by Microsoft since Windows 10 version 2004 to automatically fix issues that are not caused by security-critical updates. This involves disabling the problematic fix and re-enabling the saved previous code, i.e. not uninstalling the entire update.

I've described the Known Issue Rollback (KIR) feature in the post Windows 10 2004-20H2: Office memory or media error when opening documents fixed. Many details can be found in this Microsoft post. So far, KIR has been used a few times, most recently to fix performance problems in games (see my blog post Windows 10: Microsoft tries to fix graphics issues in with games after April update).

After all, many users swear by O&O Shutup10 to turn off telemetry data collection for privacy reasons under Windows 10. The tool is free, convenient and turns off many Windows 10 telemetry features. However, there is always collateral damage. You can search for Exper in the search field of O&O Shutup10 and get the option below. 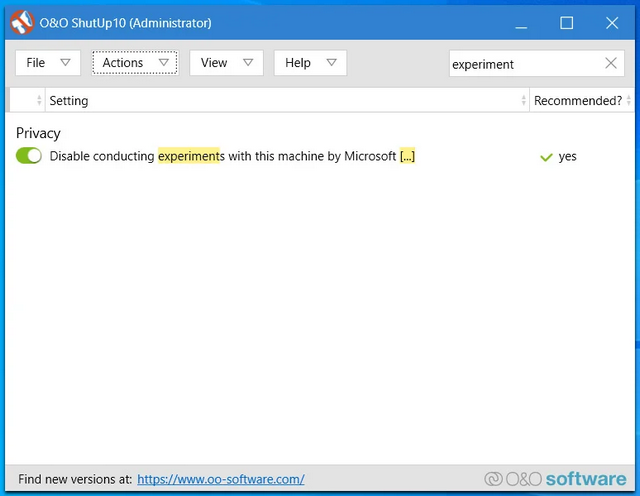 If you activate this option, which is recommended, it prevents Microsoft from abusing Windows 10 and thus the user as a guinea pig for various experiments. Actually a good thing, but unfortunately it has a catch. User Big_Beetle_Bert has noticed that the option Disable conductive experiments with this system by Microsoft […] also affects KIR. The option changes the following registry key:

There the DWORD value AllowExperimentation is set to 0. However, with this value, the user in question blocks himself from the possibility of the Known Issue Rollback (KIR) function applying the KIR fixes required for rollback under Windows 10 (from version 2004). User Big_Beetle_Bert has informed the colleagues at Bleeping Computer, who have published a longer article about the issue.

This entry was posted in Security, Windows and tagged Telemetry, Windows 10. Bookmark the permalink.