Windows 10: Microsoft tries to fix graphics issues in with games after April update

[German]Microsoft rolled out an automatic fix for Windows 10 version 2004, 20H2 (as well as Insider Preview 21H1) last week that is supposed to fix graphics issues with games (stutter, crashes, etc.). But it seems, that it didn't help for all users. Here is a brief overview of this issue.

As of April 13, 2021, Microsoft has released a slew of security updates for Windows 10, which I outlined in the blog post Patchday: Windows 10-Updates (April 13, 2021). Blog reader Bolko had left this comment (thanks for that), pointing out discussions of problems on the web. Users were experiencing frame drops, crashes and bluescreens (BSOD) related to games after installing the April 2021 updates. I had briefly addressed this in the blog post Patchday Review & Issues (April 2021). The difficulties that users of some graphics cards or games experienced after installing the April 2021 updates. 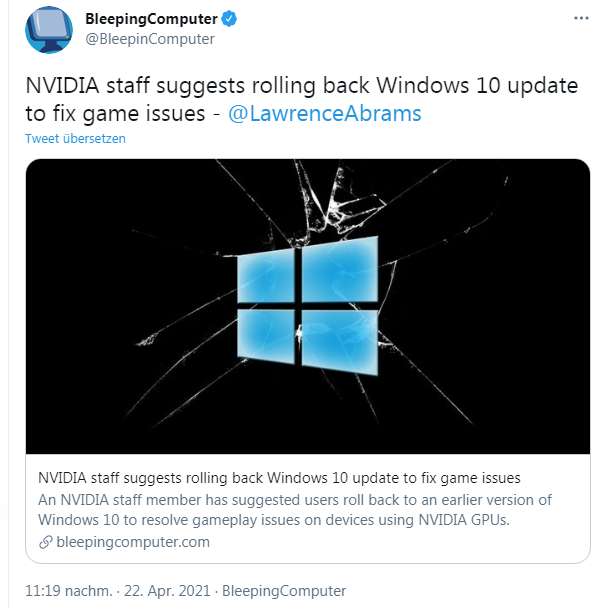 Graphics card manufacturer Nvidia recommended that affected users uninstall the updates in question, as the colleagues at Bleeping Computer write in the above tweet – I hadn't picked this up further on the blog.

Microsoft tries an auto-fix via KIR

It already came to my attention over the weekend that Microsoft has launched an action to fix these issues with graphics cards and games. Back on April 23, 2021, Microsoft posted information in the Windows 10 status area about a performance issue with games.

The company writes that a small subset of users reported lower-than-expected performance in games after installing KB5000842 or later updates. Most users affected by the issue run games in full-screen or borderless windowed mode and use two or more monitors. Affected were:

The issue was confirmed on April 23, 2021, and Microsoft immediately said that the bug had been fixed via the Known Issue Rollback (KIR) feature.

I described the Known Issue Rollback (KIR) feature in the post Windows 10 2004-20H2: Office memory or media error when opening documents fixed. It allows Microsoft to automatically roll back an update if problems are detected.

The colleagues at Bleeping Computer pointed this out here and published a registry entry in this article that can be used to determine whether KIR has been installed on Windows 10:

If the key is present and EnabledState is set to 1, Microsoft can automatically use the KIR feature in this Windows 10 version. The colleagues of German site deskmodder.de write in this tweet about that topic too. 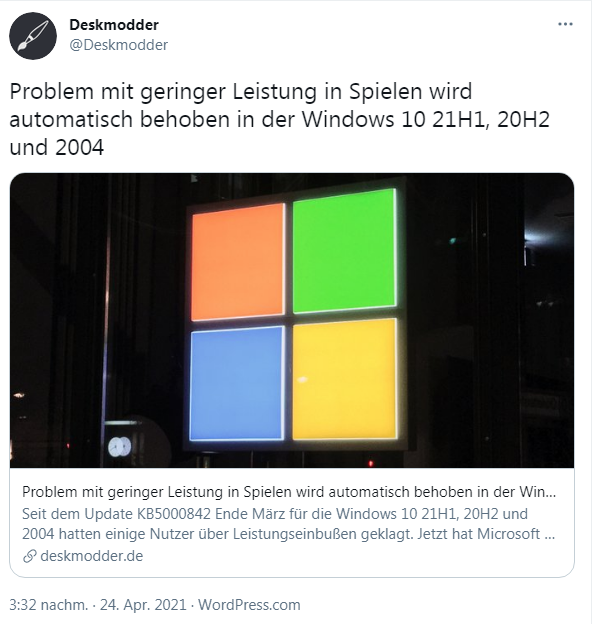 According to the article here, the bug has been fixed by KIR for those affected in Windows 10 version 2004, 20H2 and 21H1. It mentions other keys that have been changed. However, for those affected, all of this is irrelevant as the entire fix is automatic. The German comment here says, that not all affected users are facing an improvement after KIR fixed that issues.

This entry was posted in issue, Windows and tagged issue, Patchday 4.2021, Update, Windows 10. Bookmark the permalink.