[German]On April 13, 2021, Microsoft released a slew of security updates for Windows and other Microsoft products. In the context of a patchday recap, I would like to summarize some information about these updates.

Eugene Kaspersky, the head of Kaspersky, points out in the following tweet and the linked article that with the security updates there is a 0-day vulnerability (CVE-2021-28310) in Desktop Windows Manager (WDM). 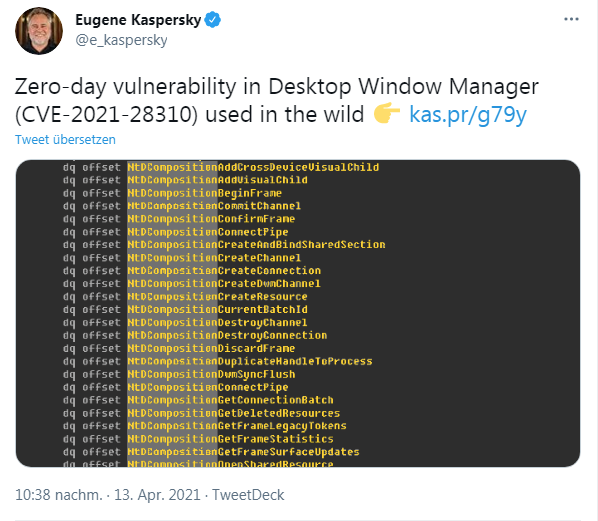 This vulnerability is already being exploited, so it is important to install the April 2021 updates promptly. Details about the vulnerability can be found in the Kaspersky article.

Updates are not offered

In the comments to the German article Patchday: Windows 10-Updates (13. April 2021), some users report that certain Windows 10 updates are not offered. Among other things, it was criticized that the update KB5001337 for Windows 10 version 1909 were not offered. Here I can possibly contribute something. In the blog, user Joseph reported an interesting observation.

It must install the April 2021 Servicing Stack Update (SSU) KB5001406 on Windows 10 version 1909 to find the cumulative update KB5001337. Explains why the update did eventually trickle in to some readers.

Exciting is the question whether the (graphics) printing problems triggered by updates in March 2021 are fixed by the April 2021 update (see Windows 10: Out-of-band Update for graphics printing bug (March 18, 2021)). There are different feedbacks here. In this German comment, simsoo criticizes unresolved printing issues and writes.

However, we have the problem here in an application that not all graphics are printed or printed incorrectly. This is clearly a problem from the March updates. As soon as you remove them, everything works again. Unfortunately, the April patches do not fix the error. We use Windows 10 LTSC (1809)

In this comment, Andreas writes that on Windows 10 version 1909, the graphics on a test machine are outputting correctly again after installing the April 2021 updates.

With the April 2021 updates, yes, the legacy Edge browser was removed from Windows 10. Blog reader 1ST1 reports in this comment that this did not work completely under Windows 10 version 1909 Enterprise.

Here I can report a funny bug after the update. When I open my Win 10 (1909 Enterprise) Start menu (whether original or Openshell) and search for Edge, "Legacy Edge" is still displayed. In Win 10 Start menu still with the old original icon (e), and in Openshell with a white rectangular dummy icon. In both cases, pages last visited with it still work out of the Start menu. But when I click on any of them, the whole Start menu and taskbar immediately crashes without error message and are rebuilt. Also, in Openshell there is another dummy icon "Edge" next to Chromium-Edge, and when I click that, the ole Edge still goes up and I can use it as if nothing happened….

It looks like Explorer.exe is crashing as a process, so the shell needs to be restarted. In a follow-up comment, 1ST1 confirms that the effect also occurs in Windows 10 20H2.

Cumulative update KB5001330 for Windows 10 version 2004/20H2 (see Patchday: Windows 10-Updates (April 13, 2021)) is causing various problems according to this German comment from Bolko and quotes from this German article:

The problem has existed since the optional preview update KB5000842 from March 29.

On Reddit, jerky graphics are reported in Doom Eternal in connection with this update. Martin Brinkmann also reports something similar on Ghacks. In addition, the KB5001330 update blocks access to network shares (see this reddit.com post). Bolko then posted links to several other finds (askwoody.com, hsion-Dentrix problem) in this German comment.

This comment mentions problems with detecting a mouse. And in this German comment someone complains that LibreOffice 7.0 no longer opens. But all in all nothing special.