[German]A brief news before we head into the weekend: Microsoft will no longer launch its slimmed-down Windows 10X (and ChromeOS competitor) in 2021, which I had actually expected for the spring release. Instead, they want to focus on the revision of Windows 10 as part of the Sunvalley project. There are even speculations that the plug has just been pulled completely. Here are the latest rumors surrounding this issue.

I confess "I was wrong" when I omitted about this Windows 10X from Microsoft and its release date. Well, I trusted the rumors from the US – when I published the German article Windows 10X angeblich in der Entwicklung fertig gestellt, claiming, that Windows 10X was code ready.

Windows 10X is Microsoft's approach to crafting a light weight Windows 10 for low end devices and as a ChromeOS competitor. Originally, it was once announced to manage devices with two screens under Windows. In summer 2020, Microsoft had to announce that the dual-screen Surface Neo, for which Windows 10X was planned, will not be released in 2020. However, they want to release Windows 10X for desktops with only one screen at the end of last year. The distribution will then be exclusively via OEMs – so you will only be able to buy devices with Windows 10X. There is a demo video from Windows Central that shows some features (see the following screenshot, clicking on it will take you to the YouTube page with the demo video). 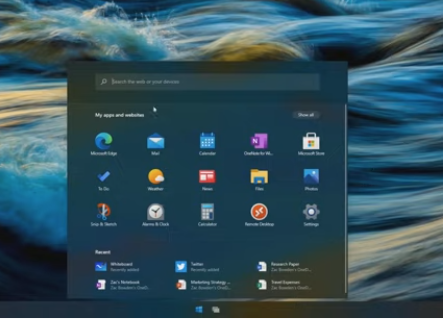 I just became aware of the following tweet from Zack Bowden that Windows 10X and its release will probably not happen in 2021. 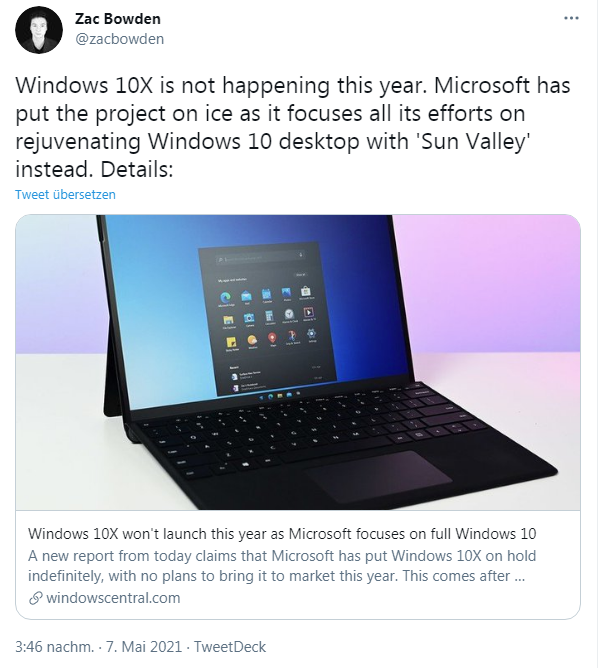 Bowden writes on Windows Central that one should not expect Windows 10X so soon – he also refers to this article by Brad Sams on Petri and to information he heard himself. Both US authors have good contacts in the Microsoft environment and get information from time to time that Microsoft employees want to leak unofficially. Brad Sams has probably talked to people who claim to know a bit more about Microsoft's plans with regard to product developments.

Bowden writes that Microsoft stopped testing Windows 10X in the spring of 2021 and has not resumed. So-called 10X self-host builds that were available for a number of Surface devices have also been removed from the internal portal, and development of 10X as a whole has stalled. Brad Sams has statements from insiders being circulated. In talking to these people, it came out through the grapevine that customers aren't asking for anything that would solve Windows 10X. What customers do seem to want, however, would be Windows 10X features ported to Windows 10.

Insiders sayed, hte advantage of Windows 10 was its flexibility, and Windows 10X worked against this narrative. Therefore, the decision had been made in management to put this OS on the back burner. Bowden does still write that Microsoft is focused on Windows 10 and Sun Valley. That's the user interface overhaul in terms of icons and style elements, which is expected in the fall of 2021. 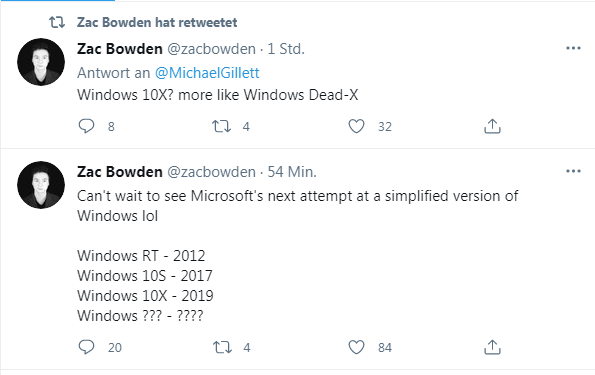 But Bowden also posted the tweet above that says it all – Windows 10X is probaly dead.

This entry was posted in Windows and tagged Windows 10X. Bookmark the permalink.