[German]Microsoft has updated a diagnostic tool called SetupDiag. SetupDiag is a standalone diagnostic tool that can be used to obtain details about why a Windows 10 upgrade was unsuccessful. I've introduced an older version within my blog post Windows 10: Diagnose tool SetupDiag.

SetupDiag works by examining Windows Setup log files. It attempts to parse these log files to determine the root cause of a failure to update or upgrade the computer to Windows 10. SetupDiag can be run on the computer that failed to update, or you can export logs from the computer to another location and run SetupDiag in offline mode. Now there are news about this tool I came across the information via the tweet below. 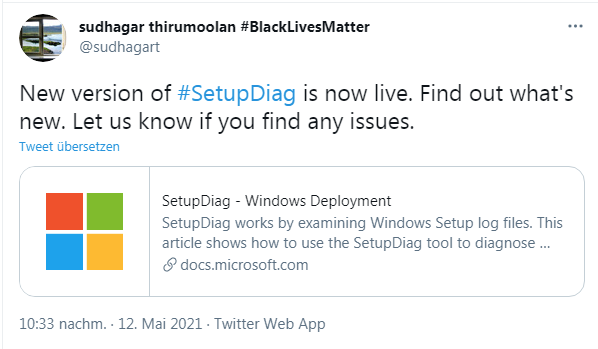 The tool itself is introduced on this Microsoft website. There Microsoft writes, that with the release of Windows 10, version 2004, SetupDiag is included with Windows Setup. During the upgrade process, Windows Setup will extract all its sources files to the:

directory. With Windows 10, version 2004 and later, setupdiag.exe is also installed to this directory. If there is an issue with the upgrade, SetupDiag will automatically run to determine the cause of the failure.

This entry was posted in Software, Windows and tagged Tool, Windows 10. Bookmark the permalink.