[German]Since a few days Microsoft has released the Windows 10 May 2021 Update (version 21H1) as a feature update. However, if you want to determine the Windows 10 version via PowerShell or other tools, you run into certain difficulties. The ReleaseID of Windows 10 21H1 returns the value 2009. I happened to come across the corresponding discussion and post this here on the blog for your information.

The topic was kicked off on Twitter by Trevor Jones in this tweet. Jones writes: Hmm, what’s this? The ReleaseId for W10 21H1 after enablement package install is 2009... and posted the following screenshot in the tweet (I split the PS output into two lines to make it easier to read.

The DisplayVersion is correctly shown as 21H1, but the ReleaseID 2009 made him stumble. This could become relevant for tools like WSUS, WAC or any (PowerShell) scripts that depend on the ReleaseID to determine the OS variant.

Gabe Frost from Microsoft then provided the answers in follow-up tweets. The whole thing is by-design, he said, and the ReleaseID to select the OS version is deprecated. 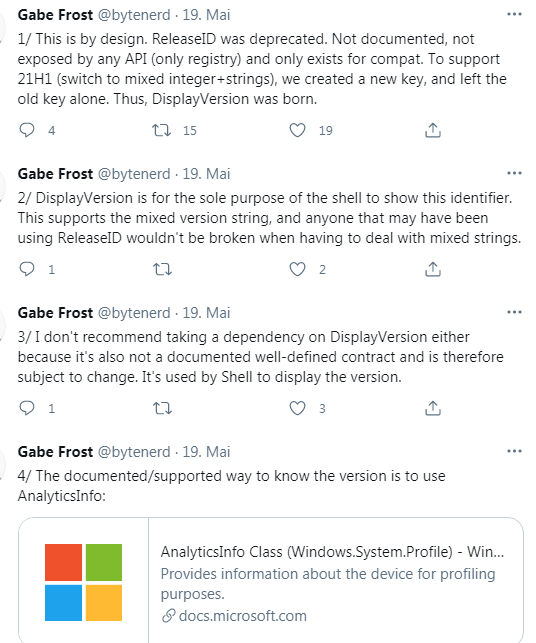 Frost writes that the ReleaseID is neither documented nor exposed by any API (registry only) and is only there for compatibility. To support Windows 10 version 21H1 (switch to mixed integer+strings), Microsoft developers created a new key and left the old key alone. This is how the Information DisplayVersion was born. So anything that relies on the ReleaseID to determine the OS build will no longer work with Windows 10 version 21H1. However, Frost also states in his tweets that you should also not use the DisplayVersion value for evaluation, as this is also undocumented. The article Frost posted here doesn’t help with evaluation via PowerShell, as the article is about an AnalyticsInfo Class for the C# programming language. 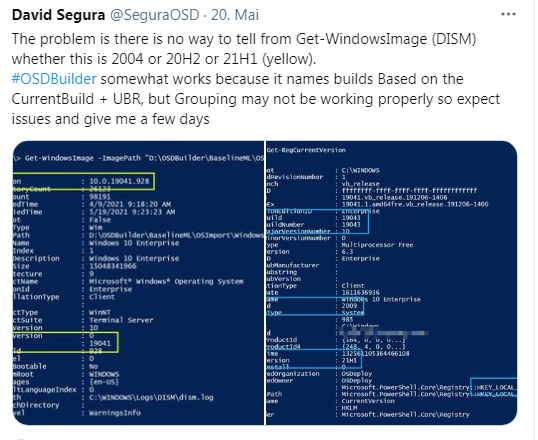 David Segura, who maintains the OSD tools, picks up on the problem in the above tweet and writes that it is not possible with Get-WindowsImage (DISM) to determine if the Windows 10 vesion is 2004 or 20H2 or 21H1. Gives some grumbling in the tweet thread from administrators who have to change their scripts. Complaining that the community can’t create tools and scripts when Microsoft throws the OS identifier over a barrel every year. Is this all a problem from your point of view and how do you as administrators solve it to determine the Windows 10 version?