[German]Owners of Microsoft Office 2010 who are still using this package should realize that this product has not only fallen out of Microsoft support, but can also no longer be re-activated in case of a fresh install. Microsoft seems to refuses now to activate the product after a re-install, as I have now learned in two specific cases.

Microsoft Office 2010 needs to be activated 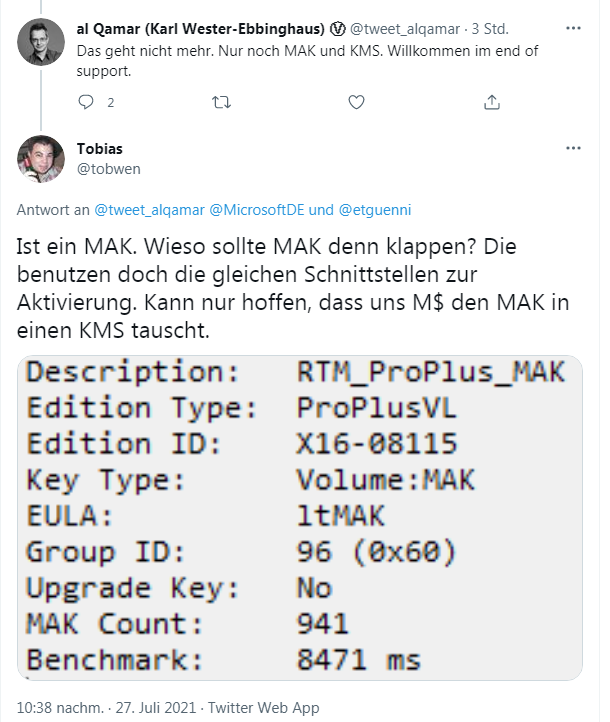 Tobias answered that he uses a volume license with a multi-activation key (MAK) for his Microsoft Office 2010. So there, too, activation seems to be denied by Microsoft.

Notes: Activating a KMS key against a Key Management Server probably still works, as I interpret above tweet right. It could also be a Linux-based KMS server, as I read on Facebook at a feedback to my German copy of this article. And a Facebook user wrote that an activation with C2R still works – but I'm not sure if a key can be used for an MSI installation with Click-to-Run (C2R). Besides, not everyone wants this C2R technology on their machine (see Office: Instabilities/crashes due to C2R and MSI parallel installation?).

After 10 minutes of discussion on the phone with an [MS] employee [it] was made clear to me that an activation is no longer possible under any circumstances. The reason was the end of support and support also means activation.

I am now sitting on several Prof and Business licenses that I can no longer use, but were officially purchased years ago for the company.

This again shows the ugly side of Microsoft Office: If Microsoft thinks that the support has expired, they are able to refuse the re-activation – so the product can no longer be used.

What is your experience?

Regardless of whether support for Office 2010 has expired, I'm wondering if the above examples are isolated cases, or if the activation infrastructure has been/is being shut down, and whether it affects retail or volume licenses. The phone activation example cited above was likely a retail package, the Twitter example referenced above was related to a MAK key.

Question: are there similar affected parties – and what type of license (retail or volume) could no longer be activated? It may be that only MAK keys are affected, while Office 2010 can still be activated against a Key Management Server (KMS key required). And the Click-2-Run (C2R) packages are also supposed to still work regarding activation.

And as a follow-up question: There is the possibility to backup an activation file and save it back after a new Office installation. What is the experience, does this work reliably?

This entry was posted in Office and tagged Activation, Office. Bookmark the permalink.