[German]Currently, some users of Windows 7 SP1 and Windows 8.1 are wondering about the updates offered by Microsoft Update Servers. Two users have contacted me who were suddenly offered ancient updates on Windows 7 and Windows 8.1 as important (thanks for that). I'll post it on the blog to find out if more users are affected. By the way, this is not the first case of such zombie updates showing up.

Blog reader Chris Pugson left a comment in the blog and reported that he had been offered update KB3185319 again:

In addition, blog reader Sebastian K. contacted me by mail because he experienced a similar case. He is still running a computer with Windows 2007, when he was suddenly offered updates as Important on this device. He writes:

I still use an old PC with Windows 7 but without ESU support. So for a good year and a half without updates, if you disregard the Windows MSR Tool.

(Don't worry, a new PC with Windows 10 is almost ready. I still like to use the old thing. )

Astonished I saw today (18.08.2021), how suddenly 7 important updates were available. After a short look, however, they were old known updates, which were previously provided only under "Optional" and which I had successfully ignored. These updates are now displayed as "Important" for me, even the description still says "Recommended Update".

Sebastian has send me the following screenshot of his Windows 7 system showing an old Edge update from June 2020 as important. 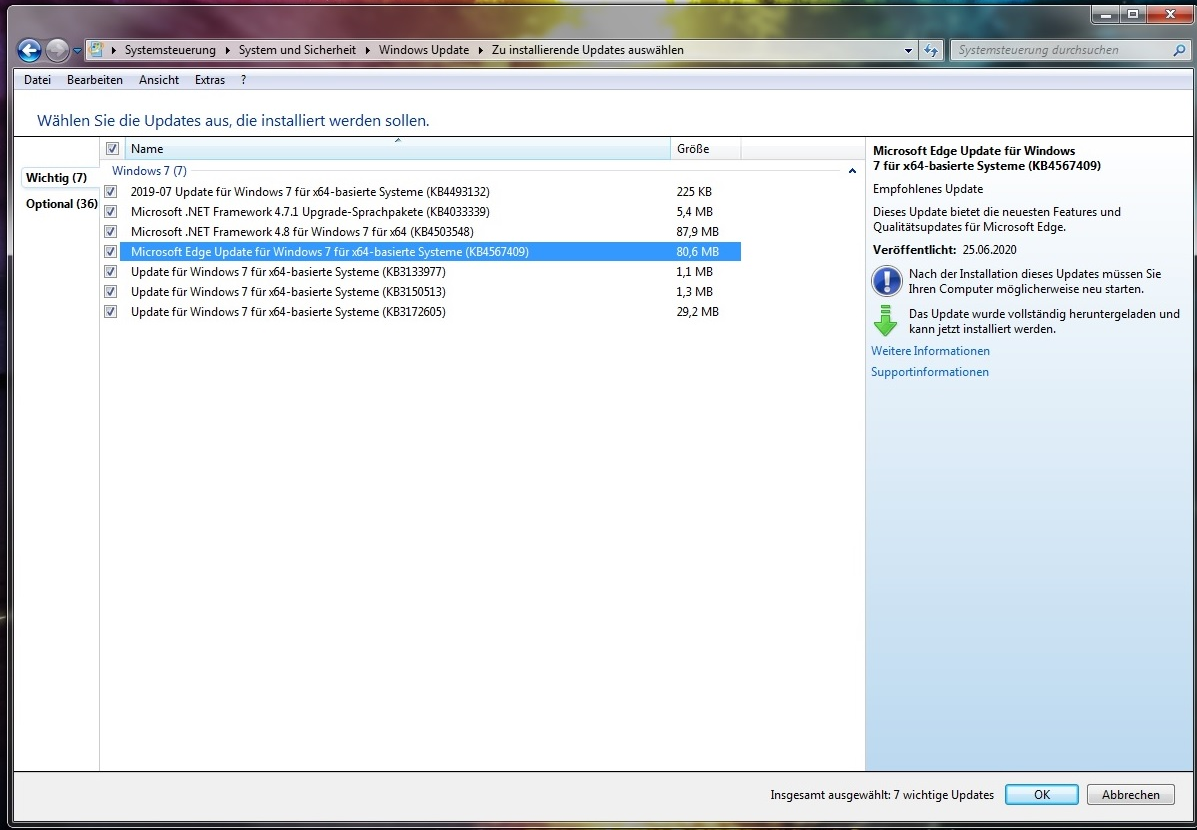 The blog reader lists the subsequent updates that have now been offered to him again:

Furthermore, he writes about it:

Especially the three lower updates (from 2016!) were noticed negatively at that time. That is why I have not installed them until today.

Perhaps this new evaluation on the part of Microsoft is worth a report. Have the problems from back then faded away, or should one continue to look at these updates critically?

I think the updates to the Edge browser on Windows 7 as well as .NET Framework are ok.

Suddenly, old updates from the past are offered via Windows Update. Usually this occurs after Microsoft has removed updates from their servers or withdrawn an update. My guess is that then something gets mixed up in the meta data of the servers. Then the update search finds any old update packages that are actually installed on the machines long ago. My advice is to check if the update is not already on the machine and then block it.