Samsung can remotely disable its TVs with TV Block

[German]Insiders know that software often has a so-called killswitch that shuts it down remotely. With Microsoft and other manufacturers, the activation can be reset and the user is left in the dark. Or a security feature like Secure Boot could be used for such purposes. Samsung also offers the possibility to remotely turn off TVs worldwide. The feature is called TV Block, and it recently came to light.

I became aware of the issue or TV Block via the following tweet from the colleagues at Bleeping Computer. 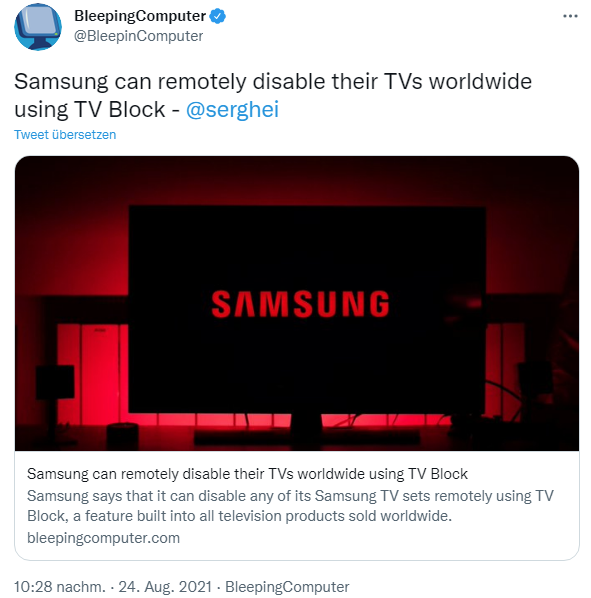 This became known more or less by accident when stores were looted in South Africa after riots in July 2021. In a press release from Samsung South Africa, the manufacturer announced that it was supporting retailers affected by looting with an innovative TV lock function. The release states:

Samsung South Africa has announced the implementation of a Television Block Function on all Samsung TV sets. The blocking system is intended to be implemented in respect of televisions that have been obtained by users through unlawful means and in some cases, stolen from the Samsung warehouses.

TV Block is a remote, security solution that detects if Samsung TV units have been unduly activated, and ensures that the television sets can only be used by the rightful owners with a valid proof of purchase.

The aim of the technology is to mitigate against the creation of secondary markets linked to the sale of illegal goods, both in South Africa and beyond its borders. This technology is already pre-loaded on all Samsung TV products.

As part of this action, Samsung has activated TV Block on all Samsung TVs stolen from its Cato Ridge distribution center in KZN, South Africa since July 11, 2021. Samsung Television Block works as follows:

If a customer's TV has been mistakenly locked, functionality can be restored once proof of purchase and a valid TV license are submitted to serv.manager@samsung.com. More information can be found here. Samsung is doing this to dry up the black market of stolen devices, as it will make the devices unsellable once word gets out. Mike Van Lier, director of consumer electronics at Samsung South Africa is quoted as saying:

In keeping with our values to leverage the power of technology to resolve societal challenges, we will continuously develop and expand strategic products in our consumer electronics division with defence-grade security, purpose-built, with innovative and intuitive business tools designed for a new world. This technology can have a positive impact at this time, and will also be of use to both the industry and customers in the future.

I understand the manufacturer's approach. But the development shows once again how the customer is led on the manufacturer's leash. Who says that the lock won't be extended for other purposes at some point, like "watch TV as a service", and if you don't pay, we'll turn off your TV. Or a misconfiguration on Samsung servers shuts down all Samsung TV sets worldwide via TV Block. I think it's also a good target for hackers, who on the one hand can annoy owners of TV sets. But it would also be conceivable that a hacker group would take a closer look at the TV Block server, deactivate all Samsung TVs as a precaution, lock the server and then demand a ransom from Samsung. The statement from Mike Van Lier quoted above that they are "continuously developing strategic products in our consumer electronics division with defensible security" sounds like a threat in this context. Maybe just reconsider the next purchase of a Samsung device.

This entry was posted in devices and tagged TV. Bookmark the permalink.