Back in March 2021, German Federal Data Protection Commissioner Ulrich Kelber had criticized Ireland's "extremely slow case processing, which lags significantly behind the processing progress of most EU and especially German supervisory authorities." As part of the complaint, Kelber revealed that Ireland had processed 196 data protection cases by the end of 2020, but had closed only four of them. Germany, on the other hand, has closed 52 of its 176 cases. The following tweet points out the facts, which are documented in the Irish Councile for Civil Liberties' (ICCL)GDPR-Report 2021. 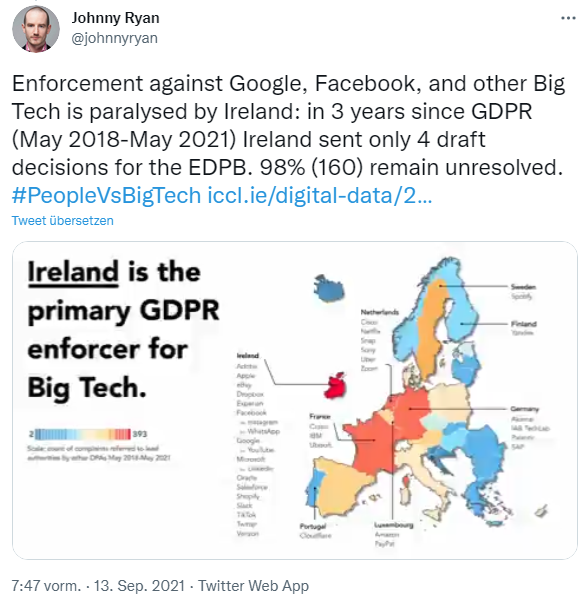 The message from the above tweet: The Irish Data Protection Authority (IDPC) is crippling enforcement of the GDPR against Google, Facebook and other Big Tech companies from the US (they are based in Ireland). In the three years since the GDPR (May 2018 to May 2021), Ireland has sent only four draft GDPR decisions to the European Data Protection Board. 98% (160) of cases remain unresolved.

The message from the ICCL report is that Europe is unable to control how large tech companies use European users' data. Three and a half years after the introduction of the General Data Protection Regulation (GDPR), enforcement of the EU GDPR against Big Tech is paralyzed because Ireland has failed to provide draft decisions for important cross-border cases. Even in the case of the fine against WhatsApp, the Irish data protection authority tried to block (see GDPR: WhatsApp fined with 225 million Euro).

In addition, European data protection authorities remain underfunded and have too few investigators specialized in the technology sector. The key findings from the report are:

This entry was posted in Security and tagged Data privacy. Bookmark the permalink.