[German]After the release of Windows 11 for the desktop, Microsoft has also released Windows 11 IoT Enterprise. This is a version for Internet of Things devices that are supposed to run under Windows. The code is the same as Windows 11, and Microsoft has published a Techcommunity article about it. What caught my eye was Microsoft's idea of equipping IoT devices with an operating system that gets exactly 36 months of support.

The release of Windows 11 IoT Enterprise came to my attention via the following tweet from ex-Microsoft employee Michael Niehaus. 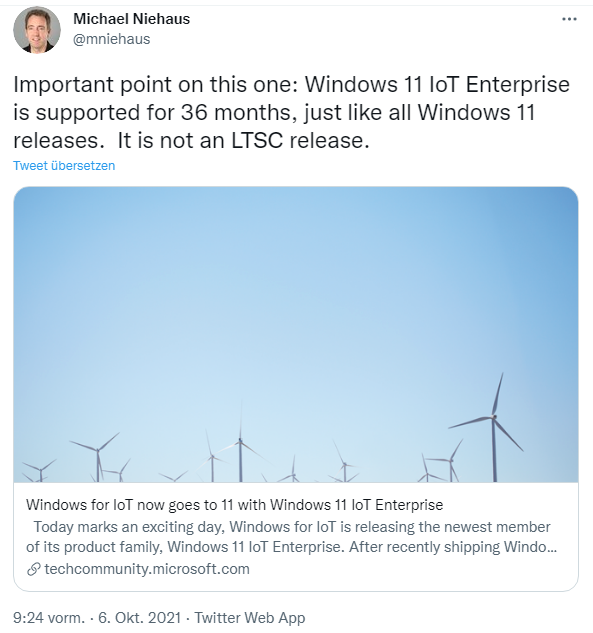 Niehaus already points out a significant fact in the tweet by noting that this is not an LTSC version and consequently only gets 36 months of support with updates as an enterprise. Who, please, is counting on a 3-year lifecycle for IoT devices? I had to read the Techcommunity post Windows for IoT now goes to 11 with Windows 11 IoT Enterprise several times. But the statement is clear.

The Windows 10 Enterprise LTSC 21H2 with 10 years of support is expected to be released soon. The version of Windows 11 IoT Enterprise released on October 5, 2021, is not an LTSC version and will instead have a maintenance period of 36 months from the month of release, as described in the product lifecycle.

In the tech community post Windows for IoT now goes to 11 with Windows 11 IoT Enterprise Microsoft gives some hints about what to expect in terms of new features in the operating system. In addition to a Windows Subsystem for Linux GUI, support for USB 4.0 and Wi-Fi 6E are also included. More details can be read in the Techcommunity post. But I wonder who seriously uses such an operating system in their products?

This entry was posted in Windows and tagged IoT, Windows 11. Bookmark the permalink.