[German]Facebook doesn't take it well to people who acts against its own business interests. According to his own information, a software developer was banned for life from this platform because he had developed a browser extension "Unfollow Everything" that allowed users to restrict Facebook's negative features.

The developer documented the story on Slate.com in this article – the following tweet refers to this fact. . 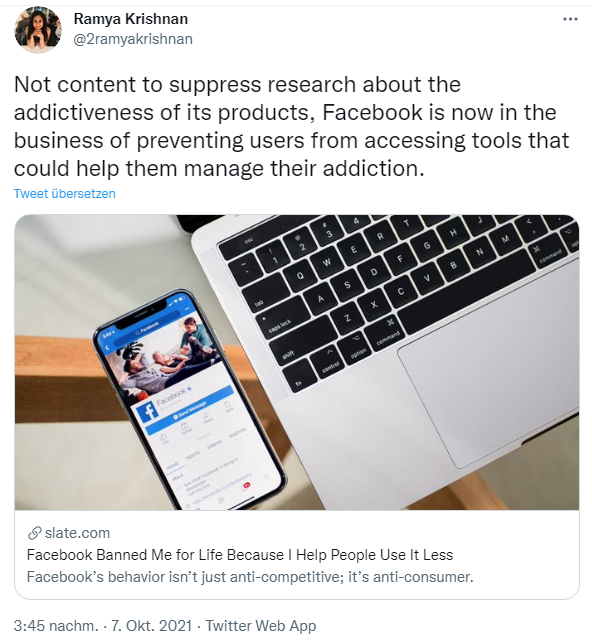 British developer Louis Barclay claims that Facebook has permanently suspended his account in response to a browser extension he developed. Barclay developed the browser extension called Simply Unfollow Everything. This allows users to automatically unfollow everything in their news feeds. The tool, Barclay said, is also used by Swiss researchers to study the link between Facebook usage and happiness.

Barclay writes that Facebook's legal department (Perkins Coie) sent him a cease-and-desist letter in July. The letter accused Barclay of enabling "unauthorized features on Facebook," including "mass following and unfollowing." The letter also referenced Facebook's terms of service, which prohibit using Facebook trademarks, accessing user content through "automated means," interfering with Facebook's "intended operations" and "facilitating or encouraging others to violate the terms."

At the time, the browser extension had about 13,000 downloads and about 2,500 weekly active users, according to Barclay. Barclay, who runs another tech startup and developed Unfollow Everything as an unpaid side project, told Page Minutes that hours before receiving the cease-and-desist letter, he noticed that Facebook had suspended him from his 15-year user account.

Citing a provision in its terms of service that allegedly binds even former Facebook users, Facebook also demanded that I never again create a tool that interacts in any way with Facebook or its many other services. These demands seemed outrageous to Barclay. The lawyers he consulted from the Knight First Amendment Institute at Columbia University and in the United Kingdom also found this outrageous.

Because Barclay resides in the United Kingdom, a lawsuit against Facebook likely would have been filed in a British court. He would have had to personally pay Facebook's legal costs if he lost the case. He couldn't afford that risk, so Unfollow Everything no longer exists, Barlay elaborates. That's not just bad for Facebook users. The University of Neuchâtel can also no longer use it to study the News Feed. Let's see what circles this new news draws – Facebook, after all, is now continuously under negative headlines.

This entry was posted in Android and tagged Facebook. Bookmark the permalink.