[German]Unpleasant surprise for some people who own an older Mac with an Intel CPU. Currently, there are more and more reports of people whose Macs can no longer boot after an update to macOS Montery. In case of doubt, hardware has to be exchanged to get a working system again.

Apple describes the update to macOS Monterey in this support post and also specifies the compatible Macs for the upgrade there. But it seems like some models don't really get along with the upgrade. Some Mac models from 2018 and 2019 simply don't boot after the upgrade to macOS Monterey. But it's hitting older models, too. On Twitter, there is this thread where a user describes his upgrade experience  ending in a bricked device.

MacOS Monterrey completely bricked my new work Macbook. The second you commit to updating, it freezes the machine and forces a hard reset. This has happened 3 times now.

The behavior is confirmed by other users. In my research I was thrown the article Mac isn't booting up after the upgrade from August 4, 2021, which deals with boot problems after an upgrade to macOS Monterey. On MacRumors, this article has further confirmations from late October 2021. Also on reddit.com, there is a thread where the initial poster has a 2019 Macbook Pro with Touchbar and ran into the problem. There, people with other models also confirm these issues.

On reddit.com, a link to this English-language article was posted,  promising possible workarounds. In the Apple support forum, someone writes that you can solve the problem in DFU mode with a second Mac (see this article). Since the user doesn't have a second computer, he had to take his Mac to the Apple Store, where the technicians would have revived the T2 chip. The problem is that Apple support sometimes wants money for a repair – and sometimes explains that the motherboards are damaged. In the Apple forum thread here, people get annoyed about something like that. Forbes has addressed it within the following tweet and addressed it in this German-language article. It looks like Apple did not have a lucky hand there. 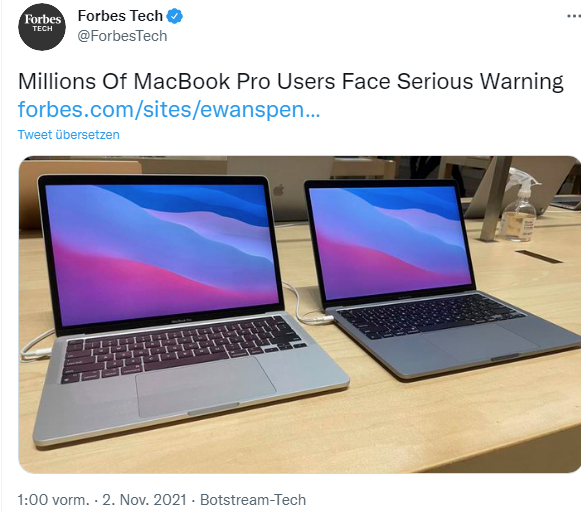