[German]So now it's happened: Twitter has suspended my account because Adobe filed a DMCA (Digital Millennium Copyright Act) complaint against a tweet of mine about bugs in the Adobe Acrobat DC installer. I has see this coming, since it hit a blog reader two days earlier and I alerted Adobe's social media teams about this false case via Twitter. Stupidity? Ignorance? Or simply keeping unwelcome coverage off the Internet?

A few hours ago, my open Twitter browser tag displayed the account lockout – see the following screenshot. Twitter told me, they received a DMCA (Digital Millennium Copyright Act) complaint against a tweet linking to a post of my blog. Below is the notification I was facing yesterday evening – because I'm German, the text is also German. It says, the account has been locked due to a DMCA complaint. 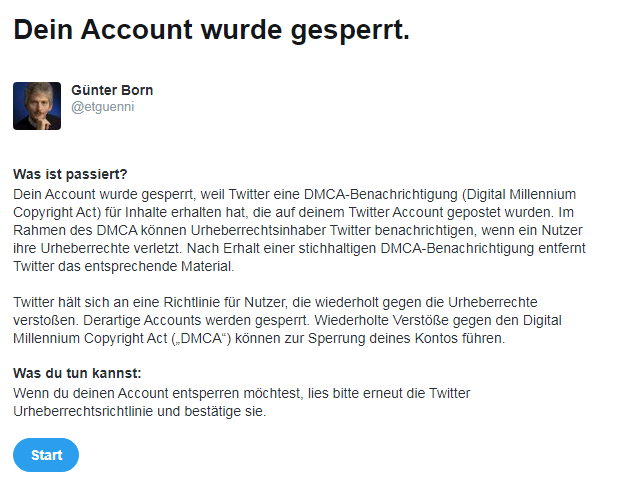 Well, I was able, to reactivate my Twitter account, but was informed, that another DMCA complaint will result of a final ban from Twitter. I then checked my mailbox and found a complaint notice (also in German). 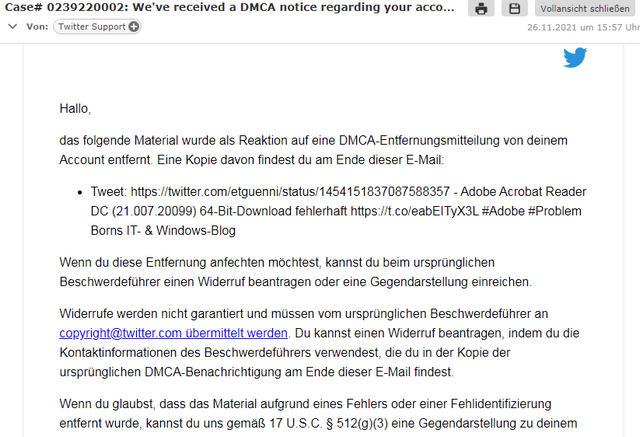 It says, that I have been blocked, because I linked within a tweet to a blog post of mine and Adobe filed a DMCA complaint against that tweet.

What's behind this DMCA?

Currently I have no clue, why this happened. According to the notification above, the issue is with my German blog post  Adobe Acrobat Reader DC (21.007.20099) 64-Bit-Download fehlerhaft. The blog post addresses the issue that the installers for Adobe Acrobat Reader DC in the 64-bit version are simply incorrect. This has been reported several times by a blog reader to Adobe support with no action.

To allow everybody to judge, at the beginning of my German post I've cross linked the English language pendant of this article called Issues with Adobe Acrobat Reader DC (21.007.20099) 64 bit download. So, if the Adobe team have had an interest to read and understand the article, even their native English language speakers might have the a chance – and don't need to use a machine translation. I can't see a copyright violation – and all links are pointing to Adobe sites to download the Adobe installer.

The DMCA complaint was filed by the Adobe Brand Protection Team in London through Incopro Ltd. I had already pointed out the facts in this German comment two days ago. The background at that time was that another Twitter user had his account briefly suspended because of a tweet linking to the same blog post got an Adobe DMCA complaint.

Since I assumed at that time, that the DMCA complaint was created in error by Incopro Ltd. on behalf of the Adobe Brand Protection Team in London – even after reading my blog post several times I could not recognize any copyright infringement – I sent a short tweet about the facts of the matter and put Adobe and the German Adobe social media team on this tweet, with the hint to take care of it.

Now that a DMCA complaint has also been filed against my Twitter account to achieve an account suspension and a suspension of the tweet, I have to assume that the service providers at Incopro Ltd. working on behalf of the Adobe Brand Protection Team in London either didn't understand the text, or are purposefully trying to keep critical coverage off social media. In both cases the DMCA complaint was abusive and evil in my view.

I have now reactivate the Twitter account – but I would be permanently banned if I received another DMCA complaint. So I also submitted a counterstatement to Twitter, but I don't see much chance. Since I had a manageable number of followers (around 1,000), the damage in this respect is limited. But the process shows me how broken the whole online thing basically is. Anyway, I'm going to disable the plugin that posts blog content on Twitter – and I remove also the the Twitter references from my blogs. Farwell. And I will increase my fight to go more in an open source direction and limit the dependencies on huge US IT giants. Adobe products haven't been used here for years. The last occasions was mentions of Adobe products in German computer books written by me, years ago.

This entry was posted in General and tagged general, Twitter. Bookmark the permalink.

1 Response to Did Adobe blocked my Twitter account via an DMCA complaint after a critical report about issues?