[German]Brief information for the readers. Adobe does not seem to be able to provide a correct download for Adobe Acrobat Reader DC (21.007.20099) in the 64-bit version. Instead of Acrobat Reader DC, Acrobat DC is made available for download.

I came across the issue via the following tweet from blog reader Karl. I have thereby assembled certain posts in the following screenshot. 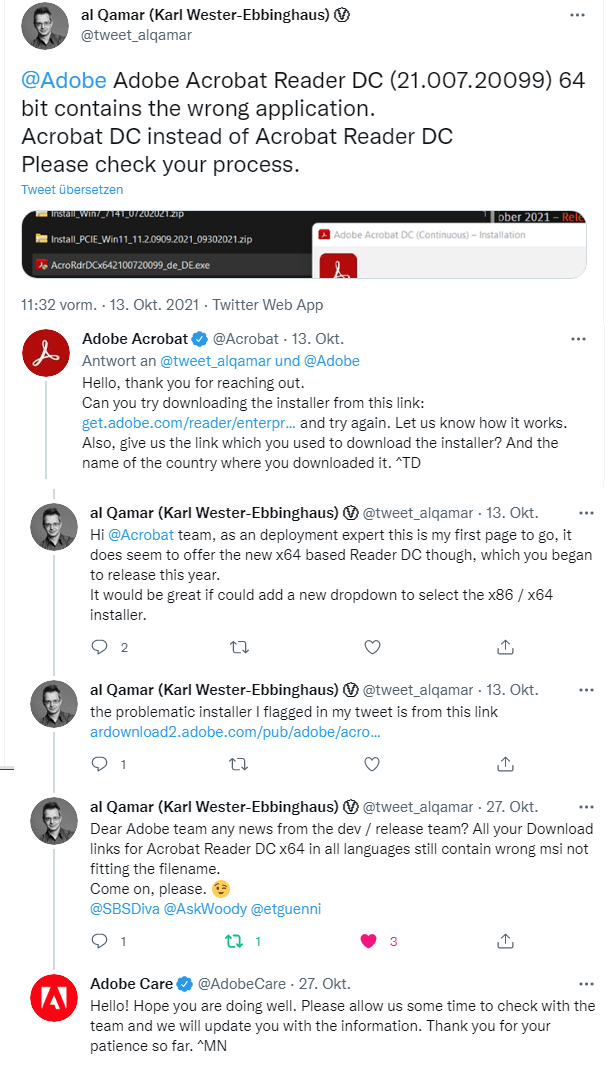 Karl asks Adobe Support to review the process. Adobe Support got back to him promptly, but as of October 27, 2021, the case was still unresolved. Karl again points out that all downloads pointing to Acrobat Reader DC x64 in all languages provide an MSI installer file that does not match by file name. Adobe has reached out again to check this out. Adobe support even explicitly provided this link to the page where the Enterprise downloads are found.

A reader of my German blog has contacted me (thanks for the comment), after I published the German edition of this blog post. He left the following comment, claiming, that everything is fine:

The above mentioned gentleman should install the file. Then he would find out that the file AcroRdrDC2100720099_en_DE.exe is the Adobe Acrobat Reader DC after all. You can even see it in the file name if you try a little. Just download and test, only then report so-called errors, which are not errors.

But I can't leave it as it is read in the above line. In the above course of tweets it is explicitly mentioned that the file name of the .msi installer has the wrong file name. I explicitly tested it with a download and unzipped it. Here are the files in question:

Once it is simply crap if the name of the MSI installer does not correspond to what an administrator should expect. Then a deployment in an enterprise environment becomes a game of roulette.

I haven't tested now if the setup.exe reloads more msi packages from the web during execution. The tweets mention names like AcrobatDC.msi and AcrobatRdrDC.msi, which is different from the files in the screenshot above.

But there's more to the story if you take a deeper look. The discussion goes even further in this thread – there Karl had also raised the issue on October 13, 2021. 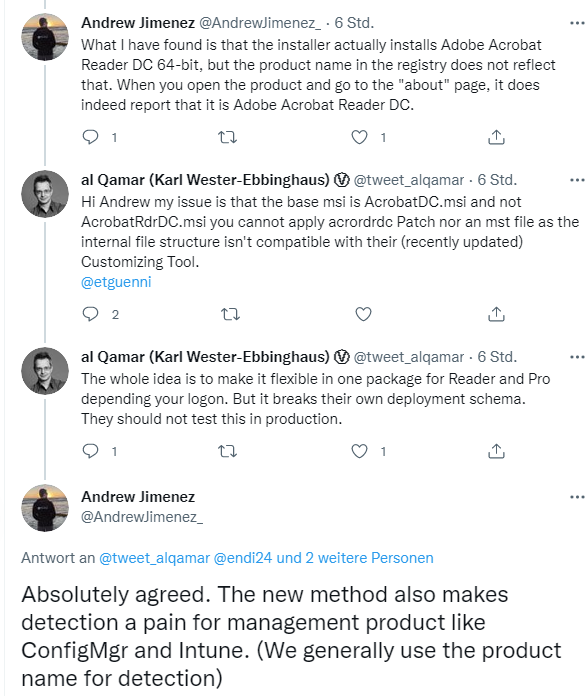 Andrew Jimenez writes there that the installer does bring Adobe Reader DC to the system. Would the blog reader be right somewhere with the above comment. But there are some subtleties to consider in enterprise environments. Besides the issue mentioned earlier that an .msi install file should reflect what is then installed, there is another issue.

So that only suggests that the Adobe process for deploying 64-bit Adobe Acrobat Reader DC installations is simply broken. Administrators working with ConfigMgr and Intune in enterprise environments simply fall flat on their faces with this mess when it comes to cleanly discovering and managing installed products. As Karl wrote to me: support is trying, but the issue has been bubbling along for a while without anything happening. Somehow the Adobe developers themselves never seem to test how their products behave in enterprise environments. What does this remind me of now?

This entry was posted in issue, Software and tagged Adobe Acrobat, issue. Bookmark the permalink.