[German]There was a report this week that Microsoft is working on a Windows 11 SE. This variant is said to be intended for a low-priced Surface Laptop. Microsoft wants to attack the Chromebook market with it. Some information and thoughts on this topic.

Especially in the U.S., Google is picking up buyers in the education market with its low-cost Chromebooks. Recently, I did read that there was some saturation in Chromebooks because buyers had hit during the coronavirus pandemic. So the coming months will see declining sales of Chromebook sales.

I had not Microsoft on the radar for this area, because I was under the mistaken belief that Redmond had finally said goodbye to this area with its Windows 11 hardware requirements. Because at the beginning of this year, there was the admission that Microsoft can't really offer anything there (see Microsoft: Chromebooks are cheaper and faster than Windows machines).

It seems that Microsoft does have ambitions for the Chromebook market after all. I had seen it in the following tweet from Tom Warren who broke it all down in this article on The Verge and links to this article from Windows Central. 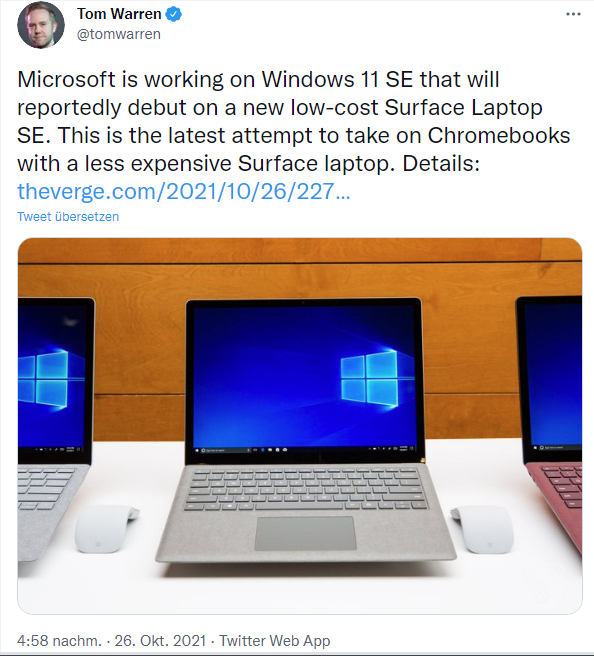 Even though it has not been confirmed by Microsoft, the whole thing sounds plausible. Citing its own sources, Windows Central states that a low-cost Surface Laptop for the education market is in development under the codename Tenjin. The device would have an all-plastic case, a 1,366 x 768 11.6-inch display, an Intel Celeron N4120 processor and up to 8 GB of RAM.

According to the sources, it is supposed to be a "no-frills notebook" that is supposed to be as inexpensive as possible. The whole thing is designed for use by students in a classroom environment. The device reportedly has a keyboard and trackpad, a USB-A port, a USB-C port, a headphone jack and a power connection via an external power adapter (barrel-style AC port).

Project Tenjin marks a new approach by Microsoft to gain a foothold in the education market. As a result, Windows Central said Microsoft is also working on a new edition of Windows 11 called "Windows 11 SE" (SE could stand for Student Edition). This Windows 11 SE is being developed specifically for low-cost school PCs like Tenjin. Allegedly, this SKU would come with special optimizations, as well as features for educational institutions that use low-end hardware.

Tenjin would have to be priced below the Surface Laptop Go, which starts at $549 in the U.S. Tenjin would have to compete with low-cost Chromebooks from manufacturers like HP, Dell and Lenovo, which have been very successful in the education market with devices under $400. Windows Central writes that the device is as good as ready and should be announced before the end of the year, unless plans change.

When I read the announcement, "yet another Microsoft oxymoron" immediately went through my mind. An oxymoron is a rhetorical figure in which a phrase is formed from two opposing, contradictory or mutually exclusive terms (such as old boy, or just cheap Windows 11 Surface Laptop).

I don't doubt that Microsoft can cobble together a cheap Surface that falls apart at the first sharp glance. Where the oxymoron comes into play is the point that this hardware should run a Windows 10 or 11, which is still somehow usable. I have often written here that Microsoft's Windows 10 is simply too fat and resource-intensive for inexpensive devices.

When Microsoft announced the hardware requirements of Windows 11, "and bye-bye low-end market" went through my head. But now they are planning exactly the squaring of the circle – a low-priced hardware, on which a fat Windows 11 is shipped. Can that work well? I think no, the whole thing remains a cramp and a stillborn.

PS: Even with Chromebooks, not all is gold. Bleeping Computer reports here that Google has been investigating a customer-reported network bug since Thursday. According to reports from users, after booting Chrome OS and trying to register the devices, the error message "Network unavailable" appears on the screen.

This entry was posted in devices, Windows and tagged Surface, Windows 11. Bookmark the permalink.