[German]In the coronavirus pandemic, demand for computer systems for homeschooling increased. The latest figures from Canalsys for Q4 2020 show a massive increase in Chromebook sales.

In the articled Canalys: Tablets and Chromebooks set all-time high shipment records in Q4 2020, Canalsys analysts released the figures for device sales in Q4 2020. For PC sales (including tablets), the last quarter in 2020 was marked by an absolute high. It was already the third quarter in 2020 where sales growth was identified – previously, the payment knew only one direction – declining PC sales. Here are some highlights: 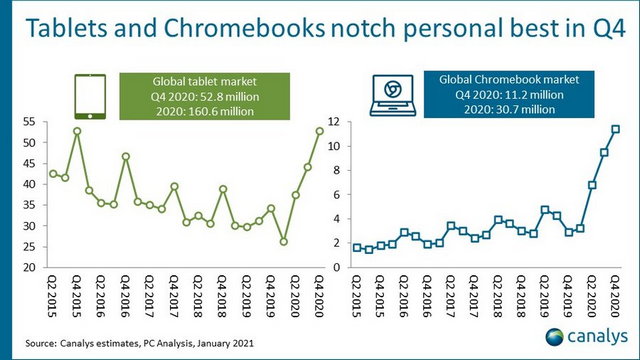 "Demand for Chromebooks is through the roof," said Canalys Research Director Rushabh Doshi. "With many countries forced to accelerate their digital education plans in the wake of additional lockdowns, schools and universities are demanding easy-to-implement solutions, and Google's digital education offerings are proving popular over competing platforms, particularly in the U.S. and Western Europe. As governments in many countries work toward a much-needed 1:1 device-to-student ratio, demand for Chromebooks in education is expected to remain strong through 2021. Outside of education, there is also growing interest from consumers and traditional commercial customers in Chromebooks to provide affordable continuity of business or personal computing."

I had reported the other day in the blog post Microsoft: Chromebooks are cheaper and faster than Windows machines that alarm bells were ringing at Microsoft about this. Microsoft Corporate Vice President of Education Eran Megiddo admitted to the staff at an all-hands meeting that Chromebooks are gaining market share over Windows systems and are cheaper, faster as well as easier to manage, and that they need to do better in this area with their own products.

Apple was able to further expand its dominance of the tablet market. Shipments increased by 40% to 19.2 million units in Q4 – the best iPad result since Q4 2014.

Huawei was the only vendor in the top 5 to see a year-over-year decline in shipments. "The growth momentum of tablets shows how important easy access to computing has become in today's world," said Canalys analyst Ishan Dutt. "Their versatility, not only in terms of different form factors and price points, but also in terms of connectivity options, make them an ideal device for a variety of use cases, from basic tablet PCs for e-learning and content consumption to powerful detachables for productivity users who spend more of their time at home." As a result, manufacturers of such devices are trying to jump on the bandwagon and have announced new devices.

This entry was posted in devices and tagged Chromebook. Bookmark the permalink.