[German]Adobe has released a security update for Adobe Acrobat (Reader) DC to version 21.005.20091 on September 14, 2021, which is intended to eliminate critical errors. The problem with this is that on some systems, Adobe Reader DC 21.007.20091 cannot be used afterwards because it crashes with error 0xc0000142. I don't have a solution yet, but pull together some information. Addendum: Added more information on September 29, 2021.

The update to Adobe Acrobat (Reader) DC 21.007.20091 is supposed to patch vulnerabilities considered critical and important according to APSB21-55. The release notes list quite a few fixed bugs. Basically, no administrator and user can bypass this update.

I had only mentioned the update in a short post (Adobe Acrobat (Reader) DC 21.007.20091). Shortly after the release, I already got feedback on Facebook that Adobe Acrobat Reader DC 21.007.20091 could no longer be used because the program crashed immediately. The usual measures like reinstalling, cleaning files would not have helped. The affected administrator then pointed out that people in his company were still able using Adobe Acrobat instead of Adobe Reader.

Meanwhile I got several feedbacks as comments on my German blog post, Adobe Acrobat (Reader) DC 21.007.20091. All commenters complaining about issues and error 0xc0000142 with Adobe Reader DC 21.007.20091. Here is the German comment from Chris, which I've translated:

Since the Acrobat update on a terminal server, I keep getting the following error message:

"RdrServicesUpdater.exe – Application Error ——— The application could not be started correctly (0xc0000142). Click OK to close the application."

Observed that the error appears when Acrobat Reader is closed. Then "Adobe Webinstaller 21.7 (32 bit)" starts in the background and then the error message appears. Server was already restarted last night and I also installed the offline version over it, without success. Any ideas?

There are other comments arrived to my German blog post that confirmed this error as well. Some users referring to Windows Server 2019 Terminal Server. But Windows Server 2012 R2 seems to be affected as well. No solution has been posted by the commenters, nor have I found a final fix on the web.

No real workaround so far

The error code 0xc0000142 is a bit crude though, if this occurs on exit it does stand for STATUS_DLL_INIT_FAILED. My gut feeling is that a DLL in the runtime environment has a faulty version and then the RdrServicesUpdater.exe triggers the error.

But my feeling is, that this will not help really.

Blog reader Christin posted a link to this recent thread from Sept 16, 2021 in the Adobe forum. There, the error occurs on a Windows Server2016 RDS farm after updating to Adobe Reader DC 21.007.20091. User frédéricm20126395 seems to have narrowed it down, and writes the following.

After further diagnosis, since the update, I found that something is triggering a Adobe repair for all users every time a user try to close the app:

Deleting all acrocef_ folders seem to prevent the repair to happen and the users won't get the error on each application close. (Note that I  did a reboot and only tested this workaround for 15 minutes).

Hope we will have a fix very soon. Also, confirming that this workaround is a valid solution (or not) would be appreciated. 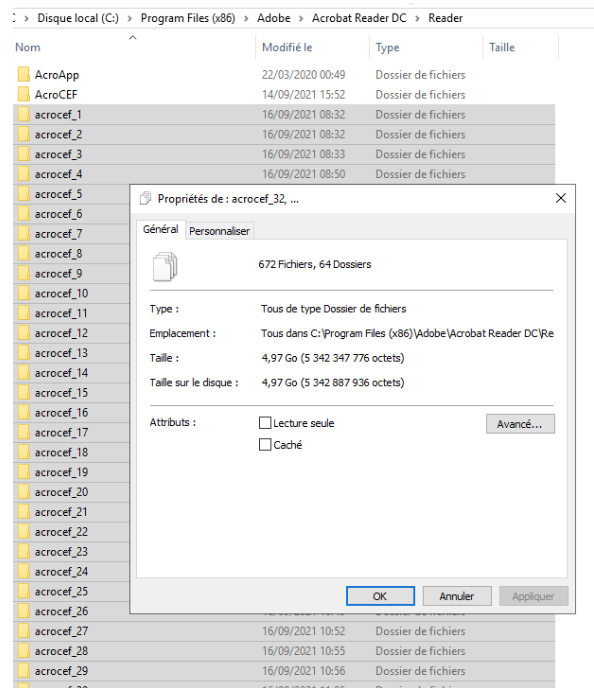 So people delete the sub-folders acrocef_ in the folder:

For some people this helped as the repair failed after that. Christine points out in the comment that renaming the Updater service to:

If anyone has another idea or solution, feel free to leave a comment. Otherwise, the administrators from enterprise environments can actually just nail the Adobe. They may be able to evaluate log files and find out more details. In my estimation, however, there is no way around a patch on the part of Adobe.

I have since come across this user description of the error within the Adobe discussion forum, dated September 22, 2021.

It seems that there are lots of problems lately with Reader and updater, but no clear patterns emerging. We are seeing this for a single Server 2012R2 RDS server, and the process appears to be as follows:

Checking with Process Explorer and quser/Session Shadow, it would appear that RdrServicesUpdater.exe is being forcibly impersonated as the user with the oldest-running active session on the server, but inside the session of the person who opened and closed reader. Error 0xc0000142 is strongly associated with programming errors relating to impersonation, and it's likely that this is all related. Even if I launch Reader elevated, the same sequence occurs.

Strangely, I cannot reproduce this on other RDS servers, either Server 2016 or 2012R2. This one server has developed the fault spontaneously. Uninstallation of Reader, removal of all of its Program Files content and then reinstallation has had no effect. Reader was on the latest version before and and after.

I then went through this thread, but as of September 27, 2021, no solution has been addressed. Adobe is working on the problem, but I guess that is not so easy to reproduce.

Another Adobe forum post on Server 2016 RDS farm can be found here. As part of the discussion, there is this note about how to prevent Adobe Reader updates with Windows registry entries, which doesn't work. But there is an interesting hint there from littleghost, which he also shared through this comment here in my German blog:

The bug also occurs on servers that have not been updated since the June cumulative update. So the September update cannot be responsible for the error.

The message: It probably has to do with the June 2021 cumulative security update for Windows Server. But it was the Adobe Reader DC update that seems to have triggered the error. The latest information is that Adobe support has probably now been able to isolate a cause based on the log files. There is no solution yet.