[German]The latest feature called Buy Now, Pay Later (BNPL), which Microsoft has added to the Edge browser for US users, seems to be causing massive anger among users. It's yet more evidence that Microsoft has lost its sense of what's important to users.

After all, Microsoft's Edge developers update this browser to a major version every few weeks. With the last Edge update to version 96, a Buy Now, Pay Later (BNPL for short) feature was added to the browser. The new feature was introduced in mid-November 2021 in the tech community in this post.

Currently, the option is only available in the US, where e-commerce vendors like Walmart offer purchase on credit. The feature built into the Edge is called ZIP (formerly QuadPay) and is designed to make it easy to buy in installments. The feature pops up when people make an online purchase in the US and BNPL is offered. Whereas, according to my information, the whole thing was rolled out as a "test" to some of the users.

Harsh criticism of the feature

MVP Adam Fowler has already addressed the issue in the tweet below and expresses his displeasure in this article. In his impression, the Edge now has an identity problem. The team wants to please everyone and piles up a lot of bloatware in the browser. 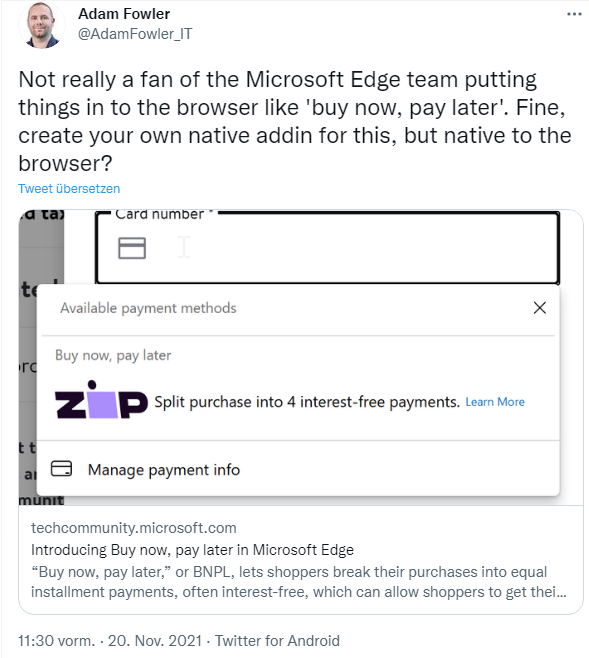 What I'm really hoping for is the rollback of this feature, and that's the reason I say Microsoft Edge has an identity problem. It can't be both a consumer and a business/enterprise solution if that's the path Microsoft is taking with some aspects of the browser. Do we need a consumer SKU and an enterprise SKU of the browser? Different installers?

The nasty word bloatware comes up, already Candy Crush is questionable in Windows 10 Home, but a no-go in Enterprise. And now the Edge browser would be littered with bloatware from third-party providers. Short-term Microsoft employee and security researcher Kevin Beaumont picks up on the mix in the following tweet. 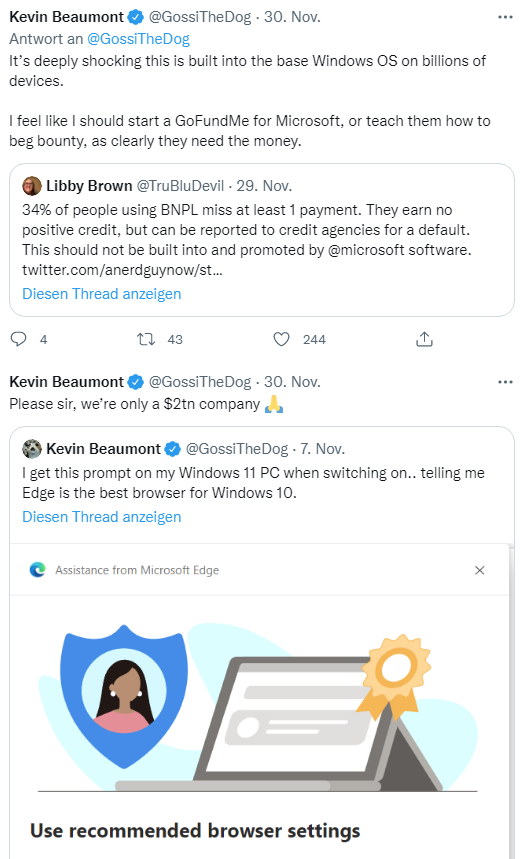 Edge would be integrated into billions of PCs running Windows 10 and Windows 11, and then a feature like BNPL would be added and it would be recommended in Windows 11 to use Edge as the best browser. The embedded tweet from Libby Brown points out that 34% of shoppers using BNPL would have forgotten at least one payment. People then certainly don't get positive credit scores and can be reported to credit agencies as bad debtors. A no-go for the Microsoft employee, who clearly says that the feature should not be built into a browser like Edge.

The topics has been making waves in the U.S. for two weeks, with user comments on the Techcommunity post clearly negative. Since ArsTechnica and other media like The Register have picked up on the topic, there has been a hail of further negative criticism. It shows how clumsy Microsoft's developer teams work. That's the case with Edge, and it's also the case with Windows 10 and Windows 11. Let's see what happens with the BNPL feature.

This entry was posted in browser and tagged Edge. Bookmark the permalink.