[German]Dark clouds over the horizon for Facebook and its users? Or joyful news for Internet users? Since Facebook (lately they call themselves Meta, but I'm still using Facebook here in the article) presented the last quarterly report, the stock has been in a nosedive, because they are hardly gaining any new users. And now there's also the threat that they'll pull out of Europe if they're not allowed to continue transferring data from Europe to the US and analyzing it for micro-targeting.

In the U.S., Facebook, or rather Meta as a conglomerate, is now really coming under pressure, because a lawsuit aimed at breaking up the company has recently been admitted (see, for example, this article). The scandals at Facebook, even after the acquisitions of WhatsApp and Instagram, are just too much.

The days there was then the quarterly report of Facebook for the end of 2021, in which they had to announce that the number of daily active members fell by about one million within three months. Although they made a profit of almost 10.3 billion dollars, this fell by 8 percent compared to the previous year (see). As a result, Facebook shares lost $230 billion in stock market value within days.

I just stumbled across various articles on Twitter that Facebook is once again threatening an exit from Europe if the EU bans microtargeting including data transfer to the US. This is addressed in the following tweet. 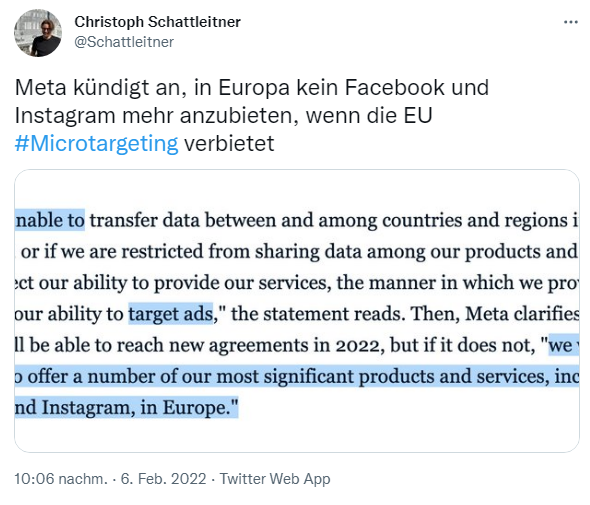 The source is the Meta Annual Report to the US Securities and Exchange Commission (2021), page 36, and this Mashable article. This includes that European users' data may not be transferred to US servers for analysis. Mashable quotes:

​If we are unable to transfer data between and among countries and regions in which we operate, or if we are restricted from sharing data among our products and services, it could affect our ability to provide our services, the manner in which we provide our services or our ability to target ads … we will likely be unable to offer a number of our most significant products and services, including Facebook and Instagram, in Europe.

In plain language, this means that if we are no longer allowed to analyze and move the data as we want, we will no longer be able to offer the services in the regions. Facebook hopes to be able to conclude corresponding agreements in 2022. It is possible that this recent Belgian court ruling will also play a role. In 2020 we have had a similar threat, but I don't believe, that Meta/Facebook withdraw from the EU with its 410 million users. Let me put it this way: I think it's unlikely that a U.S. company would drop such a large market, especially since they can operate their data centers and self-written software anywhere in the world.

The EU should make a strong regulation

Presumably Facebook is trying to build up the withdrawal as a threat. But of course we're also talking about the cake of 410 million potential EU users, which Facebook can't really miss out on. As I see it, the EU should finally get its act together and impose tough regulations: data transfer to the U.S. and microtargeting and profiling for advertising purposes should be banned for all market participants and sanctioned with tough requirements for the providers. Parity will then prevail and individual providers will no longer be able to create advantages for themselves by finding loopholes or ignoring specifications. Then new business models, possibly with European providers, will establish themselves – which may not be the worst thing. Techcrunch meanwhile addresses the issue in this article – they want regulation too – Facebook faces headwind.

This entry was posted in General and tagged Facebook. Bookmark the permalink.