[German]On April 5, 2022, Microsoft outlined the future roadmap for Windows 11. Thus, the Windows 365 Cloud PC will be integrated into Windows 11, i.e. it will not only be possible to run corresponding instances (as remote sessions) via app or in the browser, but it should be possible to boot the machine directly into Windows 365 Cloud PC at some point (i.e. use it as a thin client with direct login). Also, a new file explorer with tabs will be coming (has been in Insider testing for a while).

One of the big new features in Windows 11 that Microsoft has announced for enterprise customers is the integration of Windows 365 Cloud PC into the operating system. Microsoft has outlined its plans on April 5, 2022 within the Windows blog as well as in this post with the following new features.

Windows 365 is a solution where everything is stored in the cloud instead of on the device. This Windows 365 Cloud PC was, after all, unveiled at Inspiron in the summer of 2021 (see Windows 365: The cloud PC presented at Inspire). Microsoft touts the product as "secure by design", which is based on the Zero Trust principle. This is supposed to enable secure and productive work in a wide variety of situations.

Windows 365 thus creates a new hybrid category for personal computers: The cloud PC with an operating system in the cloud, which uses both the power of the cloud and the capabilities of the device. Windows 365 is based on Azure Virtual Desktop, according to this Microsoft article, but uses a simplified technique for virtualization. 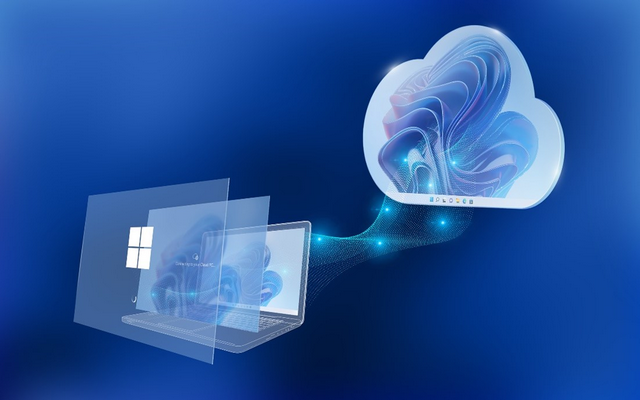 Further, Microsoft plans to provide a feature referred to as Windows 365 Switch. This will allow a user to switch directly between their Windows 365 Cloud PC and their local Windows 11 desktop. 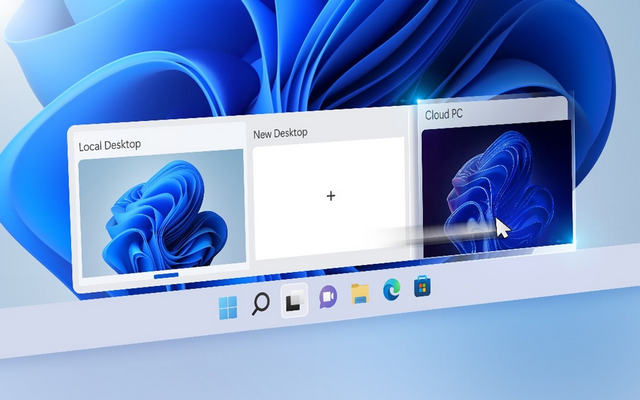 This is supposed to work in exactly the same way as with the Task Switcher, which is already common in Windows today, when switching between different desktops. The user should be able to use the same familiar keyboard commands as well as mouse clicks or swipe gestures.

Windows 365 Cloud PC as an app and offline operation

There is also said to be a new native Windows 365 app that gives users another way to get to their Windows 365 Cloud PC directly from the taskbar or Start menu. The app is supposed to provide the personal settings from the profile to the Windows 365 cloud PC.

Microsoft's Windows and Surface boss Panos Panay describes these latest features as "just the beginning of our Windows and Microsoft Cloud integration". The plans outlined above signal the direction in which Microsoft will march in the future by wanting to merge Windows 365 and Windows 11. When the whole thing will become reality is still written in the stars – because there is no information about a release date (in the past, such a thing was called vaporware).

How the whole thing is supposed to work in Europe in view of the GDPR (data protection) issue also remains unclear to me. It will also only be relevant for companies that outsource part of their employees' desktop infrastructure to the cloud. The sticking point I see: Customers will have to both rent the Windows 365 Cloud PC and provide a "fat" Windows 11 client for this solution. Using an inexpensive thin client I would have understood. The concept – which constantly emphasizes hybrid work – somehow doesn't seem that conclusive to me. But maybe the readers, who are more affected by these possibilities, can see more chances or risks.

The revised Windows Explorer, which comes up with tabs and other innovations, has already been tested with Windows 11 insiders for weeks. 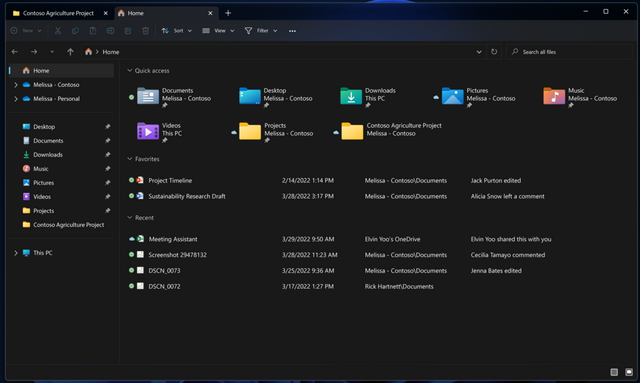 ia tabs in the header bar, Explorer is supposed to allow navigation between different folders. What was previously done in different windows, is now divided into tabs. Off the top of my head, I think it depends on your personal working style what you prefer. Personally, I have had no problem navigating between multiple windows and using them via mouse for file operations.

The new features outlined by Microsof here describe Windows supporting new contextual suggestions in Explorer via Context IQ. This is to include searching for files and relevant content along with contacts in Windows. Search results – including content in the cloud – are proposed by the new search feature. It is mentioned that you can see which files you might need, for example. This also includes files that colleagues frequently work on and also have access to.

Microsoft is also giving Explorer a new home page that includes the typical DeepL access folders, recent documents used and a new favorites option. Users should be able to add a file to the favorites via context menu with the right mouse button. Furthermore, there are said to be improved file sharing options that allow users to send files to current contacts or applications like Teams, Outlook and OneDrive.

Currently, it is still unclear if and when these new Explorer features will be rolled out in Windows 11 – there is no release date. Possibly it will come with the big feature update of Windows 11, or it will be rolled out with a monthly update. At this point, the thought already crosses my mind, "How are people supposed to use the many features if they already can't handle the Explorer's capabilities today and are often hopelessly overwhelmed?" In addition, regarding the newly announced "Context IQ Search", the defeatist thought "some users would be happy if the desktop search would just work reliably and permanently" haunts the head. Because problems with the Windows search have been discussed here on the blog for ages – and under Windows 7 I remember the advice from the Microsoft forums to simply use a third-party search tool for this purpose. But I'm sure every user will see this differently and develop their own personal working style.