15 years of "Borns IT and Windows Blog"

[German]I realized yesterday, my German "Borns IT and Windows Blog" (the sibling of my blog "Born's Tech and Windows World" here) has been around for 15 years. So to say "15 years guiding users and administrators through the numerous cliffs of today's IT landscape".

It's not really clear when I started as a blogger and when exactly the first post for my German IT blog "Borns IT and Windows Blog" was created. What is certain, however, is that the origins of the IT blog began with German Borns IT und Vista Blog, which I set up on the blogger.de platform. The goal was to have a working sample for my books (as an IT author, I had been blazing a wide trail with numerous books since about 1988) while also facilitating my activities as a community moderator on the Microsoft Answers forums. Instead of typing a solution to a problem in the MS Answers forum every time, I published it as a blog post and was able to link the post in the forum. 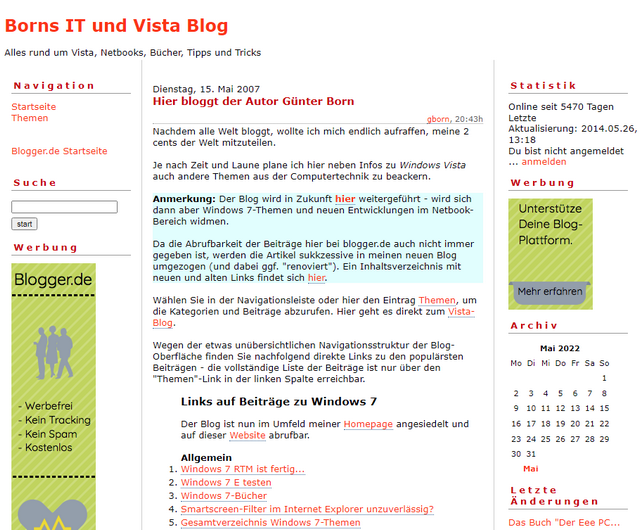 The above screenshot shows May 15, 2007 as the date for the start of the blog – but this refers to the start page. My first blog post Ich will aber mein Administratorenkonto wiederhaben …  is dated May 8, 2007 here on borncity.com. So the launch must have been between May 8 and May 15, 2007. Or it was a few days earlier, because I deleted first attempts to post. So I  can say that the blog was created here 15 years ago.

Recently, I even had to realize that my origins as a blogger go back much further, to 2003. I had dedicated the post Schwedische Bloggerin Dagny Carlsson verstirbt mit 109 to a fellow blogger who had passed away. And in my research for this article, I discovered that the roots to blogging are not in 2007 – my first blog post dates back to October 2003. My English sibling "Born's Tech and Windows World" has the first post from November 15, 2011, but it's referencing to far older English articles I've published within my German "Borns IT and Windows Blog".

My roots as an author of computer books are reaching back to 1988 – since 1993 I'm a freelance writer, who has written round about 300 to 350 titles – some (like "The Fileformats Handbook" or "Inside the Registry for Microsoft Windows 95" or "Microsoft Windows Script Host 2.0 Developer's Guide")

Looking back, it's been an exciting 15 years so far and basically the two IT blogs (German, English) are a success story (counting a million visitors a month). Let's see how long I can hold the reins and continue to run the blogs (I'm just reaching the age of 67, but svedish blogger Dagny Carlsson died with 109, so it's still a bit of time left).

1 Response to 15 years of "Borns IT and Windows Blog"