[German]It's hard to believe that Windows 8.1 will reach the end of support in just over six months and will no longer receive security updates. Microsoft plans to inform the remaining users who are running Windows 8.1 about the end of support through superimposed info starting in July 2022. This is to avoid people being surprised by the end-of-life (EOL) of Windows 8.1.

January 2023, Windows 8.1 will reach the end of its life, i.e. on January 10, 2023, on Microsoft Patchday, this operating system will receive security updates for the last time and will be considered "End-of-Life" (EOL) from that point on, as you can read here. The operating system can still be used, but no more known security vulnerabilities would be closed as early as February 2023.

Windows 8.1 will remind users about the end of support on January 10,2023, starting in July 2022  untill January 2023. Mary Foley mentioned this in this article at ZDNet.com. Within this article it states: 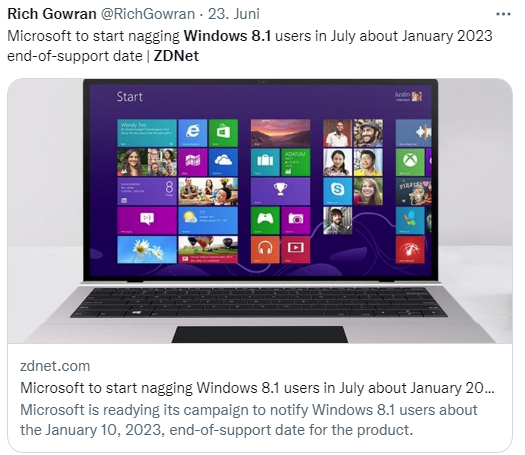 To make sure Windows 8.1 users are aware, Microsoft will start notifying them about the upcoming end of support in July. When they see the notifications, they can click "Learn More," "Remind Me Later" or "Remind Me After Support Ends," which will last until January 2023, Microsoft said.

This type of notification has existed in the past with Windows 7 SP1. Only systems running Windows 8.1 that are members of a domain should not see this reminder.

Regarding upgrading to Windows 10 or Windows 11, which is actually obvious, it looks black in my estimation. The requirements of Windows 11 are so high that typical Windows 8.1 machines won't meet them. With Windows 10, you have to see if an upgrade makes sense. Unofficially, at least the Windows 8.1 key for activating Windows 10 should still work. Addendum: There is now a Microsoft FAQ available.

This entry was posted in Windows and tagged Windows 8.1. Bookmark the permalink.