Microsoft had plans to disable macros by default in Office 365. This is because macros represent an attack vector for malware like Dridex, Emotet, Trickbot, Qbot, etc. in Office. There is an old Office roadmap from Microsoft that addresses the issue. The plan was to block macro execution by default in Access, Excel, PowerPoint, Visio and Word with version 2203. First for the Current Channel (Preview) in early April 2022, and later in other update channels such as the Current Channel, Monthly Enterprise Channel and Semi-Annual Enterprise Channel. Microsoft even wanted to roll out the macro lock to Office LTSC, Office 2021, Office 2019, Office 2016 and Office 2013.

In the post Microsoft does not want to block macros in Office by default after all, I had reported on July 8, 2022 that Microsoft had dropped its plan to disable VBA macros by default in Office applications like Word, Excel and PowerPoint. There was no real explanation like that, just a reference to "feedback" from users.

Now things are becoming a bit clearer, as Microsoft has issued a statement as an addendum that has been picked up by various media (see the following tweet). 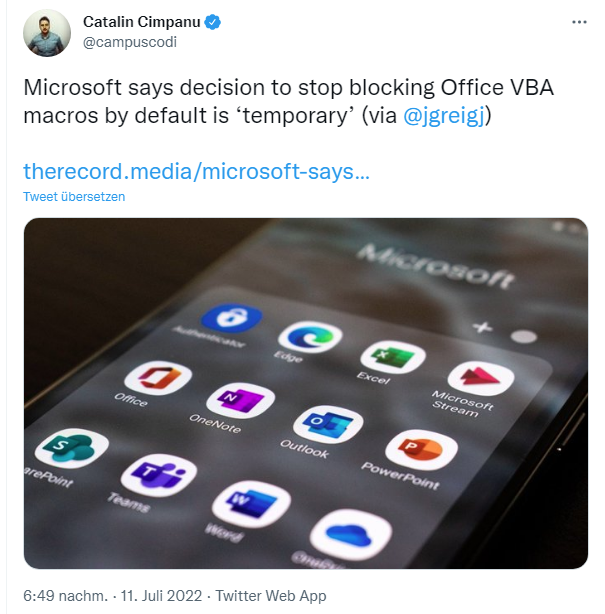 The suspension of the default macro blocking in VBA is only a temporary measure, Microsoft said, as you can read in the addendum in the Techcommunity post:

Following user feedback, we have rolled back this change temporarily while we make some additional changes to enhance usability. This is a temporary change, and we are fully committed to making the default change for all users. […] We will provide additional details on timeline in the upcoming weeks.

While it's unclear what the reason is for the roll backwards from the roll backwards – things will eventually move forward again. Microsoft will explain to the user community when it does. In the meantime, administrators can disable VBA macros via Group Policy (see).

This entry was posted in Office, Software and tagged Office. Bookmark the permalink.