[German]There had been speculation about a slimmed-down Outlook Light app for Android devices for some time. Now, Microsoft has officially introduced this app, which is intended for weak Android devices. Currently, however, this variant is not intended for Germany or European countries. 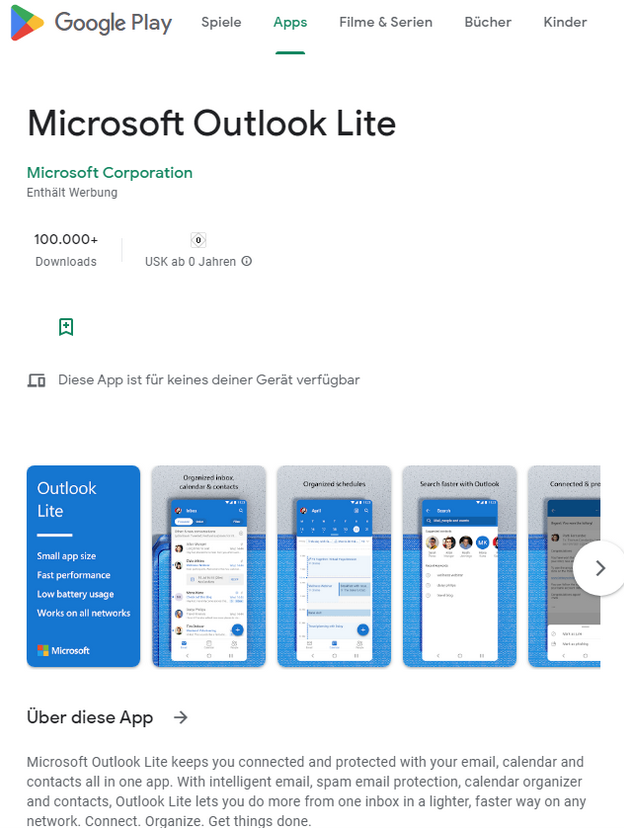 A few screenshots of the app featrues are shown – more images are available in the Techcommunity post. The app, which is just 5 MB in size, is said to require extremely little memory (1 GB RAM) and battery power on the Android device, and according to the description, it can manage emails, the calendar and contacts from one account. Thus, the app is supposed to provide the most important functions of Microsoft Outlook for weaker Android devices. Nevertheless, intelligent e-mail management and spam protection are promised. In addition, access to calendars as well as contacts for an email service should be possible. At Dr. Windows, I read that the app can only manage a single e-mail account, though.

Outlook, Hotmail, Live, MSN, Microsoft 365 and Microsoft Exchange Online are mentioned as email services supported by Outlook Lite – so the app only refers to the Microsoft offering. But the functions are supposed to work in any network environment (WLAN or mobile with 2G, 4G, etc.). Outlook Lite is available now in Argentina, Brazil, Chile, Colombia, Ecuador, India, Mexico, Peru, Saudi Arabia, South Africa, Taiwan, Thailand, Turkey and Venezuela. Microsoft writes that they will check whether the app will be released for other countries in the future.

This entry was posted in Android, Software and tagged Android, App, Outlook. Bookmark the permalink.