Outlook/Word hang on Uber invoices and other mails with tables

[German]With one of the latest updates, Microsoft has once again implemented a bug in Microsoft Office (from version 2206 build 15330.20196). Both Microsoft Outlook and Word hang on certain documents that contain tables. Explicitly listed are emails with invoices from Uber. A patch is supposed to come in August 2022, and there is a workaround.

I had already seen it on colleagues, but blog reader Robert also contacted me about the issue (thanks for that. Microsoft has published a support post Outlook stops responding when viewing Uber receipt emails and some other emails with tables on July 29, 2022, describing a new issue.

Microsoft states that when opening, replying to or forwarding some emails that contain complex tables, Outlook stops responding. The same table contents also cause Word to stop responding. But the number of blog readers receiving Uber invoices is probably rather smaller, isn't it? But it can also happen with other complex documents. The following mail with an Uber invoice doesn't look that complex to me. 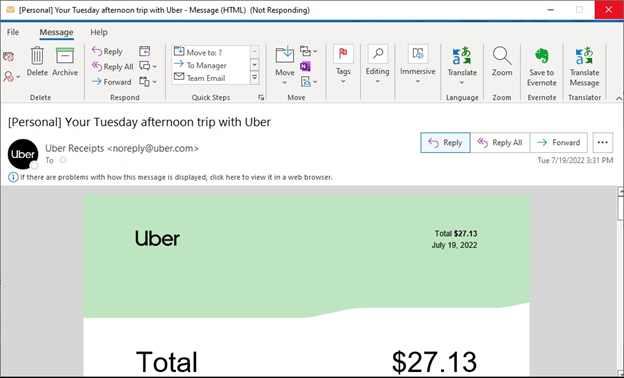 Microsoft first identified this issue in Office 365 in Current Channel version 2206 build 15330.20196, but it also occurs in higher versions. Microsoft states that the bug occurs in the current builds of Beta and Current Channel Preview.

There is a workaround

As a quick fix, the Word team has implemented a fix that will soon be released to the Beta channel for verification of the fix. Anyone running a production version of Office who encounters the Outlook or Word error can try a downgrade to an earlier Office version:

The final fix for the bug described above should be released on patchday, August 9, 2022, the team hopes. Anyone affected by this bug?

This entry was posted in issue, Office and tagged Outlook, Problem. Bookmark the permalink.