[German]On its VirusTotal  service, Google receives numerous daily submissions of files to check if they are malware. In a new report, "Deception at scale: How malware abuses trust," a team from Google has compiled findings on various techniques malware uses to bypass defenses and make social engineering attacks more effective. This should help security researchers, security professionals and the general public better understand the nature of malicious attacks.

I came across the following tweet from Catalin Cimpanu a few days ago, which addresses the issue and links to the blog post Deception at a scale, dated August 2, 2022. 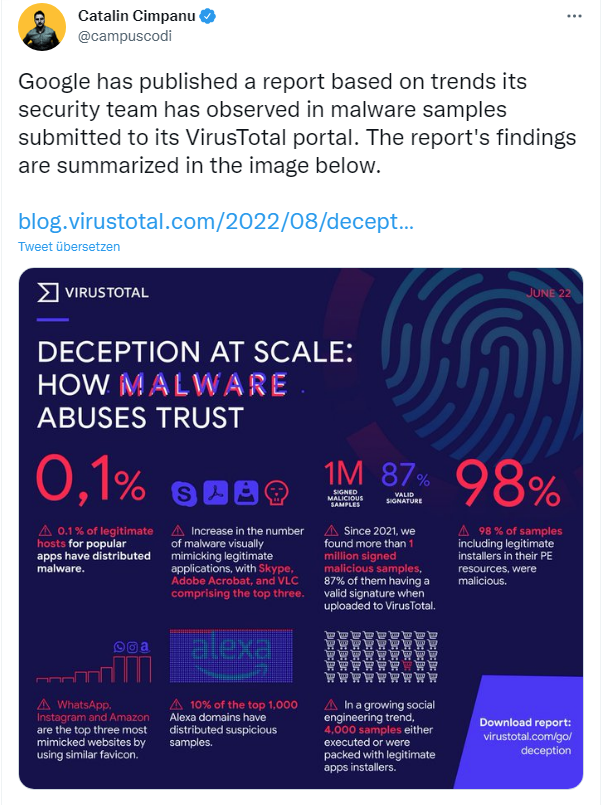 The message from the above chart is that malware is increasingly trying to misuse trusted domains of software projects or companies for its own purposes.

One of the most effective social engineering techniques is to hide malware in installation packages of legitimate software. This is done via supply chain attack, where the attackers gain access to the official distribution server, source code or certificates. These are exactly the cases that were probably detected on Virustotal based on submitted samples. Some of these samples were detected as malicious by the VirusTotal scanners – but the detection always lags behind the development of new malware. The details can be read in the Virustotal article – the report can be downloaded there after registration.

This entry was posted in Security and tagged Sicherheit. Bookmark the permalink.