A small note for users of the messenger Threema. The developers are very privacy-conscious and do not use any software libraries from Google or third-party providers in their app. In the meantime, the app is also available for FDroid. So goodbye tracking through frameworks.

I came across this fact some time ago on Twitter via the following tweet from Mike Kuketz – a blog reader also pointed this out to me afterwards (thanks for that). 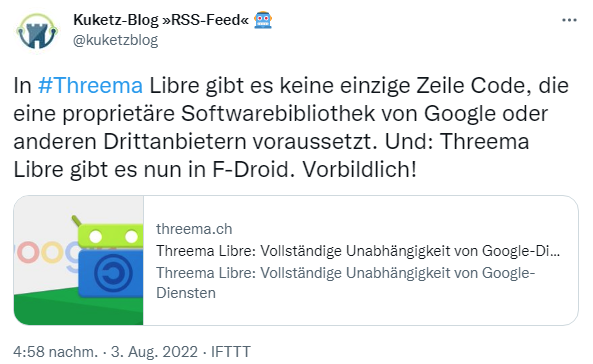 So if you value independence from Google and use Threema, you should read this article (still in German) by the developers about Threema Lite. There, the app developers describe the details of how they coded the app to be independent of Google and other third-party providers. Quote (translated):

After the introduction of Threema Push, which allows Threema to be used without Google's push service, we now go one step further with Threema Libre: This Threema version for Android is free of any proprietary dependencies from the ground up and is now available via the alternative app store F-Droid.

There is not a single line of code in Threema Libre that requires a proprietary software library from Google or other third parties. For example, only Threema Push is used for notifications, and a fallback to Google's Push service is impossible from the start. Because Threema Libre also supports reproducible builds, it is relatively easy to verify that the installed app does not leak data to Google. And since the entire code including all software components used is open source, the app as a whole can be completely examined.

Users of Google-free Android variants thus have the option to install Threema worry-free via F-Droid and keep the app up to date with its update management.

Users of Google-free Android variants thus have the option to install Threema via F-Droid and keep the app up to date with its update management. Downloading Threema Libre via F-Droid requires adding Threema's F-Droid repository. Details can be found in this FAQ .

This entry was posted in Android, Security and tagged Android, App. Bookmark the permalink.