[German]Dark clouds over the cyber company NSO, which made inglorious history with its Pegasus spyware. The CEO, Shalev Hulio, is resigning – and 100 employees out of a total of 700 have been laid off. Looks like real crisis the company got into due to the sale and use of its spyware.

NSO Group is an Israeli technology company that offers the Pegasus spyware, which enables remote monitoring of smartphones (Android, iOS, etc.). The Trojan can be installed on the devices unnoticed within seconds to monitor phone calls, SMS, emails and even encrypted chats, as well as access the microphone and camera.

According to the NSO Group, however, the Trojan is only used by "government agencies" to avert danger (terrorism, crime). In mid-July 2021, it became public that the Pegasus surveillance software (Trojan) of the Israeli NSO Group is widely used on smartphones and was also found on phones of European government officials and journalists. A list containing 50,000 phone numbers of at least ten NSO Group customers, entries from 2016 to 2021, had come into the hands of Amnesty International and Forbidden Stories, a Paris-based media non-profit organization.

Research by an international consortium of journalists suggests that hundreds of journalists, human rights activists, lawyers and politicians were spied on by the Pegasus spyware through their smartphones. NSO Group denied that the list revealed anything about spied targets and even threatened legal action against the above organizations for reporting. I had reported about the facts in the blog post NSO Group's Pegasus spyware on many smartphones.

Since that time, hardly a month goes by without Pegasus spyware being found on some activist or politician's smartphone somewhere. The company is out of control – and in the summer of 2021 the offices of NSO Group were raided by the Israeli government (Ministry of Defense).

Apple also filed a lawsuit against NSO Group and its parent company OSY Technologies in November 2021 for alleged surveillance and targeted attacks on the United States. In addition to Apple, Microsoft, Meta, Alphabet, and Cisco have also either taken legal action against NSO or heavily criticized the company. In addition, NSO landed on a U.S. trade blacklist.

Now an economic problem seems to be looming. I came across the issue via this article and the tweet below. NSO is laying off 100 employees, 15% of its workforce, and its CEO Shalev Hulio (one of the co-founders) is resigning. He will be replaced by current COO Yaron Shohat, but Hulio is expected to remain with the company and be responsible for mergers and acquisitions. As part of this new role, he will be responsible for helping the company find a new owner. 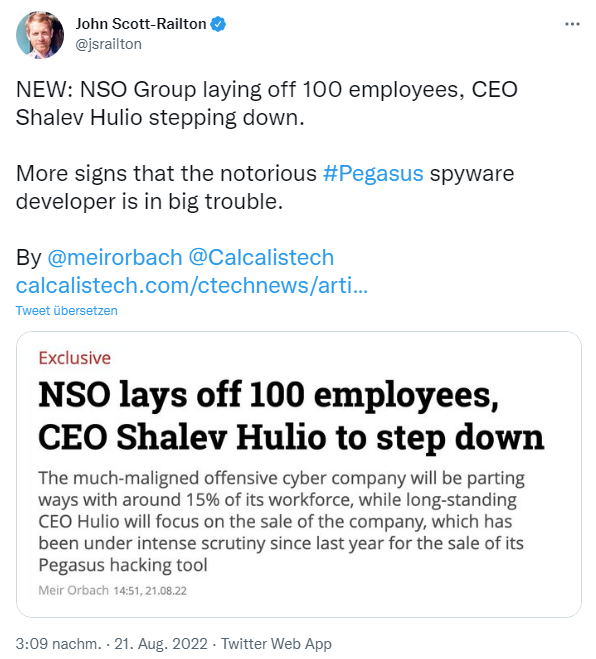 Sources close to the company told the Cacalist website that the Israeli Ministry of Defense's decision to reduce the number of licenses for the sale of offensive cyber tools has already driven several companies into bankruptcy. More would also go bankrupt if this policy does not change. Recent rumors said that NSO was on the verge of bankruptcy. However, Calcalist writes that the company will have revenues of about $150 million by the end of 2022. It remains exciting.

This entry was posted in Security and tagged general. Bookmark the permalink.