[German]Windows 11, which was released a year ago, will get a feature update at the end of September or in October 2022. It still runs internally as Windows 11, version 22H2, but Microsoft seems to have decided on a name. According to initial reports, the feature update will be rolled out for fall 2022 as the "Windows 11 2022 Update".

On October 5, 2021, Windows 11 was, after all, generally released to users – and it was clear that a feature update was coming in 2022. Microsoft has been working since 2021 on this version called "Sun Valley", which should be called 22H2 in the previous nomenclature (comes 2022 in the 2nd half of the year). 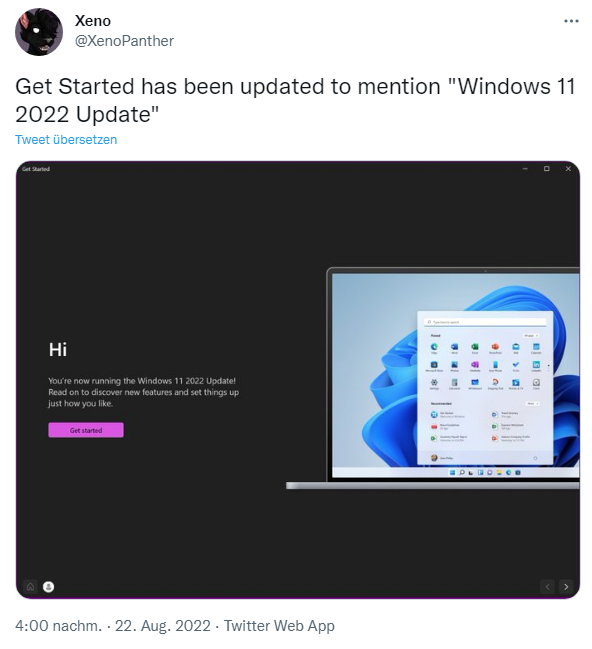 In the above tweet, a user with the alias Xeno now points out (I came across it here), that Microsoft has publicly shown a name for the upcoming Windows 11 for the first time. In the above tweet, a screenshot is shown that says the user is now using "Windows 11 2022 Update". As a result, the official name for the upcoming version of the operating system will simply be "Windows 11 2022 Update."

At The Verge, Zack Bowden already said in this article a few days ago that his sources at Microsoft are talking about a release event on September 20, 2022. So Windows 11 build 22621 will not be rolled out on patchday, September 13, 2022. The date is still unofficial and could still be postponed in case of problems. The following new features can be derived from the previous Insider builds for this version:

In addition, the new version is said to feature numerous UI improvements and consistency enhancements. The "Windows 11 2022 Update" will be free for Windows 11 owners.