[German]Oracle has facing a class action lawsuit , filed last week in the Northern District of California. Activists accuse Oracle of operating a "global surveillance machine" and violating the basic privacy rights of hundreds of millions of people. At issue, it seems, is data collection for advertising purposes.

I came across this issue via the following tweet. The class action lawsuit was filed by two activists who see a violation of basic privacy rights of hundreds of millions of people. 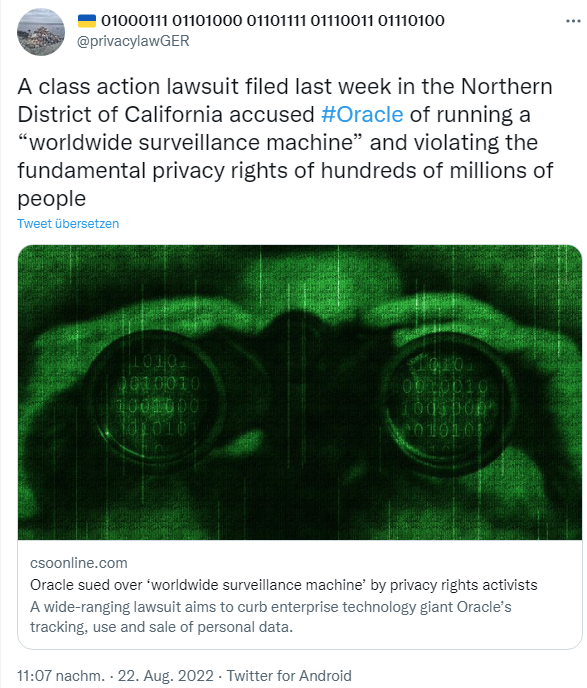 The plaintiffs (Dr. Johnny Ryan, senior fellow at the Irish Council for Civil Liberties (ICCL), Michael Katz-Lacabe, research director at the Center for Human Rights and Privacy, and University of Maryland computer science professor Dr. Jennifer Golbeck) in the lawsuit are privacy activists from the U.S. and Ireland who claim they have data proving that Oracle has been profiling them without their consent. They say these were combined by Oracle and its adtech and advertising subsidiaries into detailed dossiers on some five billion people without their consent. The activists say they are acting on behalf of global Internet users affected by Oracle's data breaches and are now suing.

The problem is that the U.S. doesn't have a nationwide privacy law, which is how the lawsuit was filed in California. The suit alleges that Oracle violated the California state constitution by collecting and selling personal data, and asserts a common law claim for invasion of privacy, along with five other causes of action ranging from state privacy laws to the federal Wiretap Act. The whole thing is a tricky legal box, however, and the outcome is far from certain.