[German]Small addendum and summary of two issues with which Microsoft is currently annoying users of Microsoft Outlook. First, users of the Outlook app for Android and iOS receive ads for Office 365. In addition, there is quite a bit of resentment brewing among Outlook users about a layout change in the Windows app. The issues have been bubbling along for a few days now.

New layout in Outlook on Windows

Blog  reader Martin W. alerted me to the issue via email (thanks for that) after Microsoft distributed a new Outlook view for the Windows app. The changes in question were announced back on April 10, 2022 in the Techcommunity post New location for the Mail, Calendar, People, and other modules. It states there:

The location for accessing Outlook apps will move from the bottom to the left. Outlook users in the Current Channel can opt-in to test the new feature since March 2022. This will soon be the default setting for navigation in Mail, Calendar, Contacts and other apps (starting with Current Channel version 2207). 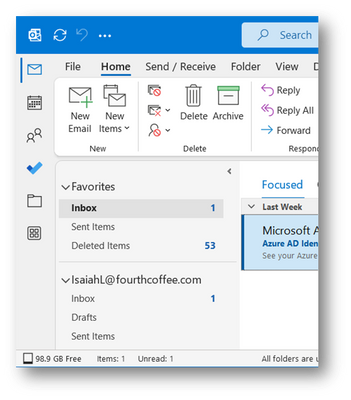 This update is intended to provide a consistent layout across Outlook, Teams, and Office.com when switching between apps, and make room in the user interface for integrating more apps into Outlook. Apps such as Tasks, Yammer, Bookings, Word, Excel and PowerPoint should be easy to launch without leaving Outlook. The number of apps displayed can be customized via context menu, with users right-clicking on their favorite apps to pin them.

The Outlook team writes that they are aware that this is a big change to the user experience and it will take some time for users to get used to the new location for Mail, Calendar, etc. But there is no option to return to the old navigation.

However, this layout change is causing considerable user discussion, as you can read here. The number of (negative) comments is now many times more extensive than the actual announcement. The justification "standardization" of the developers is somehow understandable. But the incident shows on the one hand, how conceptionless Microsoft acts in this whole area – there is probably programmed agilely on it, without anyone has a rough plan, where the whole thing wants to develop in the Office network. And it's yet another confirmation that you should never make layout changes to widely used software – that annoys users.

I had already seen it as a screenshot on Twitter about days ago, meanwhile it's been going around widely in the media for the week. Microsoft shows sudden ads for Microsoft Office 365 subscriptions in the Outlook app for Android and iOS, designed like mails. The following tweet addresses this. 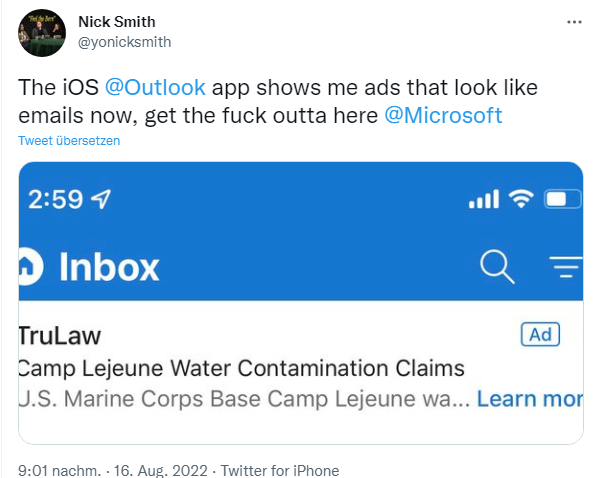 Since the Outlook app for Android and iOS is free, you have to be prepared for advertising to finance it – so far, so clear. After The Verge picked up on this, Microsoft seems to have confirmed it.

"For free users of Outlook, ads are shown in their inbox and they can choose to enable the 'Focused inbox' feature if they would like to see ads only in the 'Other' inbox"

Sometimes, however, such advertising makes less sense – even if it can be hidden by swiping in the app. To the affected users, perhaps the advice to do without the Microsoft Outlook app altogether and to manage the mails with other apps.

This entry was posted in Office and tagged Outlook. Bookmark the permalink.