[German]Microsoft never tires of selling the "new innovations" in the user interface of Windows 11. Some things are a matter of taste, but occasionally it is also helpful to look at other opinions. A former Microsoft employee, at the time head of program management for the Windows User Experience (UX), has now spoken out. In a nutshell: The man is shocked at what has become of Windows 11 and its user experience – especially when it comes to the Start menu and search.

I  myself have been very cautious with criticism lately – a GUI is ultimately a matter of taste. But I had already communicated in earlier blog posts that I think Windows 11 is a kind of leftover ramp. Windows 10 was taken as a foundation, then some strategists were allowed to specify some features (which was then responsible for the hardware requirements). And then the GUI of the cancelled Windows 10X was re-used for start menu and user interface with rounded windows (see also Plug pulled: The End for Windows 10X …).

As a reminder: Windows 10X was planned as a slimmed-down operating system for low-end devices. Originally, it was announced to manage devices with two screens under Windows. After the demise of the dual-screen Surface Neo, Windows 10X was further developed as a desktop operating system. However, when the customers communicated that it was a "dead horse" that nobody needed, Windows 10X was discontinued. At the same time, Microsoft announced that they would incorporate the development of Windows 10X into other products. We know the result as Windows 11.

I thought it was strange to sell the whole thing as a "cool innovation" – and various statements from blog readers also paint a picture that the new window surface takes its toll on performance. The fact that the flat Start menu should pose its own challenge and that "folders in the Start menu" in the upcoming Windows 11 22H2 update will be celebrated as an innovation, is just a footnote. Well, some users like Windows 11 – but I have had my doubts, that we are on a good track.

Admittedly, I myself am somehow quite "old school" and out of time. I was influenced by Windows 95 and its interface design with windows, taskbar and start menu. At that time I had the privilege to translate the Microsoft Press US title Programming the Windows 95 User Interface by Nancy Cluts into German for Microsoft Germany. Nancy Cluts explained in her book many decisions and considerations to create a consistent user interface that had to be used by software developers since that time. Much of what was discussed there in the book I have therefore internalized, as it seemed well thought out to me at the time – much of the window design has, after all, "survived" for almost 20 years.

With the release of Windows 8 and the apps, I realized that the earlier considerations of the GUI design team were no longer valid. The start page of Windows 8/8.1 was pure chaos, and every app developer (also at Microsoft) was free to knit their GUI as they pleased. Today, I think I know that Microsoft has gone belly-up with this very concept and is again relying more on Win32 apps – where the original GUI defaults for windows, etc. with minimize, maximize, and close buttons still come through. But on the desktop surface, Microsoft developers are experimenting for all they're worth in terms of Start menu, taskbar and window shapes.

What the expert says

Textio is a job ad text enhancement service. This uses a proprietary dataset of more than 350 million job ads. Using AI, it analyzes job descriptions in real time and highlights jargon, boring passages, and words that might seem particularly masculine or feminine.

Harris has worked in user experience design for years, and at the time was chief of program management for Windows User Experience (UX). Currently, a tweet from Harris is now making waves (colleagues at Winfuture noticed it first): 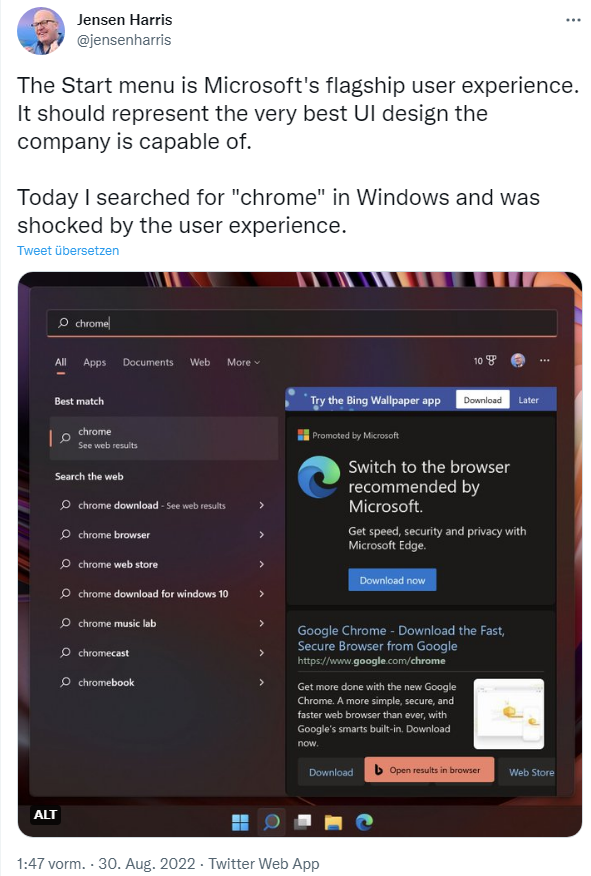 He posted the screenshot showing the Windows 11 Start menu with the Start menu search. When searching for Chrome, he was not shown the Chrome browser as an executable application (the browser was probably not installed), but only received references to the web. The right part of the start menu with the search praises a wallpaper app and advertises to switch to Microsoft Edge – which Microsoft recommends. And somewhere there is a link to the Google Chrome download page – again framed with an option to open the results page in the browser or the web store.

Jensen Harris explains what bothers him in several follow-up tweets. The right side seemed to him like the Internet Explorer Toolbars from 2008 with all sorts of pointless entries. Then mentions the banner ad I touched on for a "Bing Wallpaper App," which to him seems to be from the days of Web 1.0 and Geocities. To him, it looked like a viral infection – the text was misaligned, and set against a background from the Windows Vista era, he writes.

The Edge ad draws particular criticism. Jensen Harris writes: A good user interface should help people complete a task with as little "friction" as possible. The largest user element on the right of the Start menu (the ad for switching to Edge) is specifically designed to distract the user from the task at hand (who, after all, is interested in the Chrome browser).

Harris also picks up on the elements I criticized above, such as "Open results in browser" in his critique. Harris says that it was not a good decision by the Windows 11 team to move the Start button to the center of the taskbar. [Which is due to Windows 10X's use of the leftover ramp.] According to Harris, the position in the (left) corner not only had decades of muscle memory, but this arrangement also took perfect advantage of Fitts' Law to place the button ideally. The centered orientation was worse for mouse movements and worse for touch operations, he says. Harris writes:

Microsoft has many brilliant designers who care deeply about the work they do – I've worked with many who are still there! It just depends on what your priorities are.

The user experience needs to be designed with the same intensity as your technical investment.

It's basically a scathing critique of Microsoft's current approach, and the whole thing shows how broken the Microsoft developer world has become. I don't know, why things are going downhill (is it broken by management?).