Microsoft kills Office; it's branded Microsoft 365 in the future

[German]During the Ignite 2022 conference, it also became known that the strategists from Redmond want to abandon the Office product brand. The applications previously marketed under Microsoft Office will be offered under the name Microsoft 365 in the future.

It has been 32 years since Microsoft established the term Office for its suite of applications including Access, Excel, PowerPoint, Outlook, Word, etc. In 1992, when the first Office package was introduced, it included Excel, PowerPoint and Word – all programs that could be used in everyday office life. Later, other Office modules such as Access, Outlook and OneNote were added. The colleagues from Bleeping Computer have taken up the history here.

Since 2017, there was Microsoft Office 365, which included the above Office applications, but as a subscription model with annual payments. During this time, it was clear what Microsoft meant and wanted. There was Windows and there was Office – and a user knew what he could somehow expect under Microsoft Office.

However, in 2020, Microsoft began marketing Microsoft Office 365 modules with Windows as a subscription under the Microsoft 365 brand name. This subscription model has been aggressively marketed among consumers and business users since that time. Now marketing seems to have put its money where its mouth is. 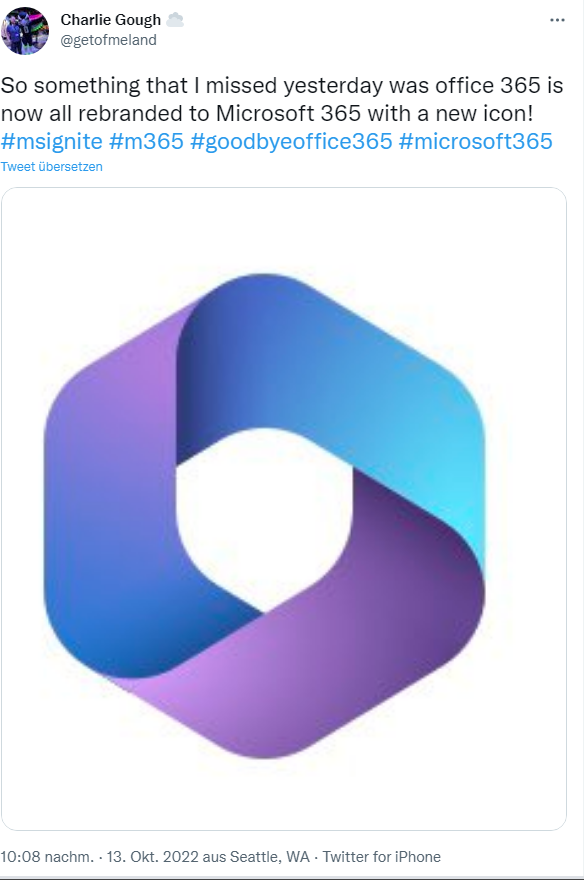 I had already noticed it this week via the above tweet. Microsoft Office 365 is now being renamed Microsoft 365 and the whole thing is getting a new logo.

Microsoft 365 is Microsoft's cloud-based productivity platform that includes apps like Microsoft Teams, Word, Excel, PowerPoint, Outlook, OneDrive and more. Microsoft has unlocked an FAQ about the renaming on this page.  In the coming months, Office.com, the Office mobile app and the Office app for Windows will become the Microsoft 365 app. The whole thing will get a new icon, a new look and even more features, the FAQ says.

This entry was posted in Office and tagged Microsoft 365, Office. Bookmark the permalink.