This week German blog reader Robert G. already emailed me a short note on the topic of "support MS 365 apps on WS 2022": We have had the discussion the other day and now came another confirmation from Microsoft – but is still in a kind of beta status with no date when it will be released. And also German blog reader Gregor also got in touch with a mail: Apparently the topic MS 365 Apps on WS 2022 is now final according to Microsoft. Have just stumbled upon it by chance. Was also partially taken over in the support articles (with the EOL for WS 2022). Thanks to both blog readers for pointing this out. 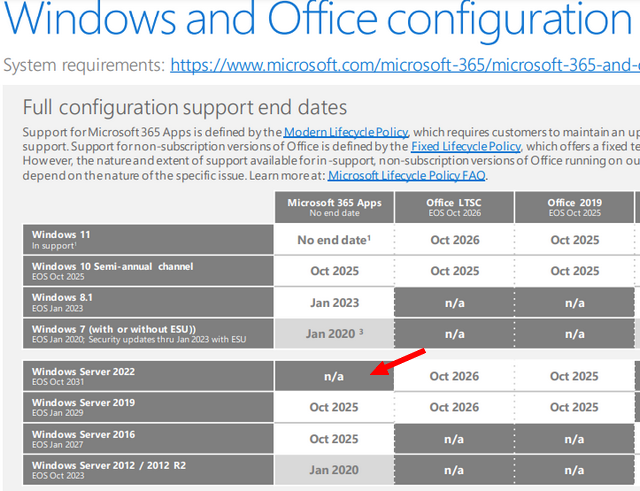 It was kicked off by an affected party with a large number of Windows Server 2016 instances with Microsoft 365 apps (Office 365). The affected person wrote in early December 2021 that he needed to update these servers. He made it "incendiary" in his post because the end of support for Windows Server 2016 was January 2022 after all (that's not so true, that's when Active Support ended, Extended Support still runs until January 12, 2027).

U-turn:  Support for MS365 apps after all

The issue has probably led to quite a bit of protest from customers. In any case, in September 2022, there was feedback in Microsoft's tech community from Microsoft employee Elden Christensen on the user post Support for M365 Apps (O365) on Windows 2022, who announced that Microsoft had reconsidered. I had picked this up in the blog post Windows Server 2022: MS 365 apps to be supported.

Now there is the Techcommunity post Windows Server 2022 adds support for Microsoft 365 Apps – Updating our support policy through October 2026 from October 14, 2022, in which Microsoft employee TJ_Devine finally confirms the new development.

Based on feedback from customers, we are happy to share that we are updating our support policy for Microsoft 365 Apps on Windows Server 2022.  Support for on-premises and Azure deployments will be available through October 2026.  This covers the period in which Windows Server 2022 is in mainstream support.

Currently, Microsoft is already starting to revise the support pages and the documentation (may take a few days). The Microsoft page Windows Server end of support and Microsoft 365 Apps already confirms this: 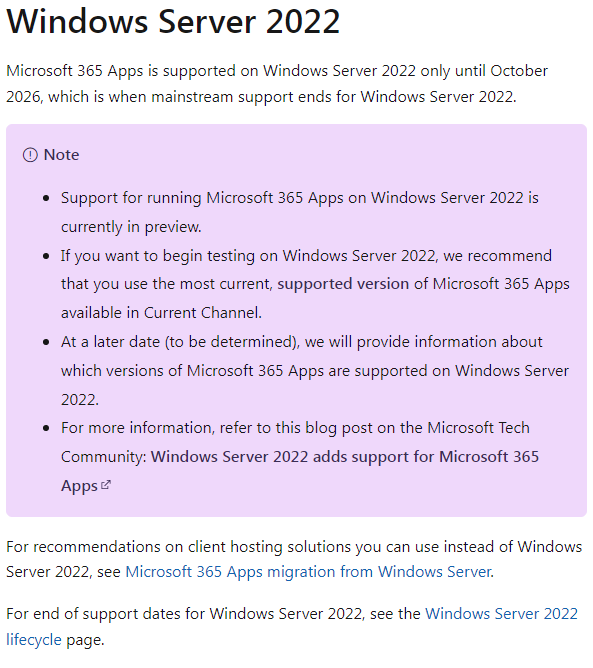