Updating on-premises Exchange servers with CUs and security updates is a "terrible job" for administrators – often something fails and the administrators have to fix that broken feature manually. The most recent case was mentioned in the article Microsoft Exchange January 2023 patchday issues. There it could be the case, that the services did not start automatically after the update and this had to be fixed manually. In the meantime, Microsoft has officially listed this "do it manually" approach as a workaround for the last January 2023 update.

Frequently, however, Exchange servers simply remain unpatched and are as vulnerable. Spectacular cyber attacks on such vulnerabilities, which can pave the way for attackers into the Active Directory, are the dark side of the Exchange boom. Microsoft has recently come up with quite a few security mechanisms such as AMSI integration or Microsoft Exchange Emergency Mitigation Service.

A survey tests the water

I became aware of the survey via the following tweet from Scott Schnoll, Senior Product Marketing Manager for Exchange Online and Exchange Server at Microsoft. 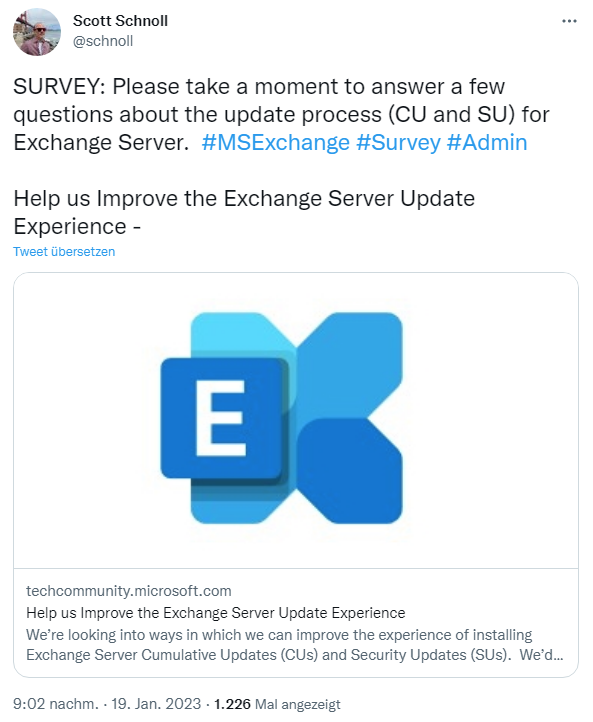 On this survey page, the user is guided through a series of questions about the Exchange Server update experience. Microsoft asks about the number of mailboxes, Exchange Server, versions or the last patch installed. And Microsoft wants to know why the last patch was not installed, whether the Emergency Mitigation Service, Extended Protection, Cert Signing, etc. is used, etc. But Microsoft also wants to know whether administrators can warm to automatic installation of CUs and security updates if the Exchange is accessible via the Internet.

This entry was posted in Software and tagged Exchange. Bookmark the permalink.