[German]The installation of the latest CUs from July 2021 for Microsoft Exchange Server bricks the ability to update custom attributes in the Exchange Control Panel (ECP). That is what some user reports suggest. This affects different on-premises Exchange versions. Here's a brief overview of the issue – I've found so far – a fix from Microsoft isn't known, only a workaround.

I was informed about the issue by a user on Twitter in this tweet. The user writes, that once the latest CUs are installed on Microsoft Exchange Server, it is no longer possible to update Exchange ExtensionCustomAttributes in the Exchange Control Panel (ECP). 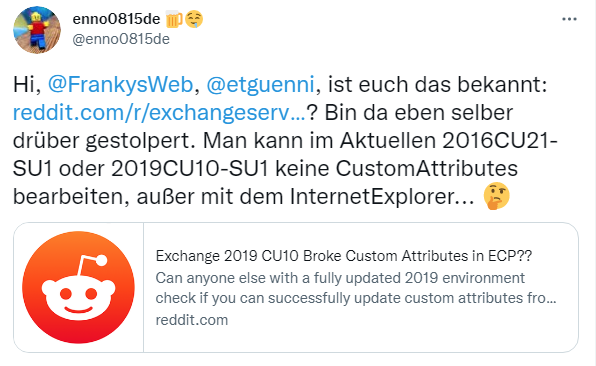 Here is the English translation of the German tweet.

Microsoft Exchange Server includes 15 extension attributes that can be used to add information to a recipient, such as an employee ID, organizational unit (OU), or other custom value for which no existing attribute exists. Microsoft has explained the details in this article.

It should still be possible now with Internet Explorer to change these custom attributes. The joke is that yes, Internet Explorer 11 is now out of support. The user linked to this Reddit.com thread, where a user writes the following.

Can anyone else with a fully updated 2019 environment check if you can successfully update custom attributes from ECP? Since I updated on Friday, when you hit OK to save the custom attributes screen, it no longer updates the list box on the main mailbox form. Of course, when I hit OK to save the user, it does not update the attributes. I have been unable to google up anyone with a similar issue. Of course, powershell still works, but those who manage this stuff only have ECP access right now.

In replies to this post, which is just over a month old, other users confirm this behavior. Another user writes that Exchange Server 2016 is also affected.

In Microsoft's Q&A section I found the entry Exchange 2019 CU10 Broke "Custom Attributes" in ECP panel from July 21. There someone writes:

Hi everyone,
We have three Exchange 2019 CU9, that are configured as DAG clusters,
After the update to CU 10, the "Custom Attributes" in the ECP panel not work, any changes are not saved!
I've search about this issue and find seemly this is a bug in Exchange 2019 "CU10"
is it any solution to resolve this issue?

And in a reply, one user notes that he has noticed that the custom attribute values can be edited with Internet Explorer (which is also noted in the tweet above). Other users have confirmed this behavior or Microsoft employee KaelYao-MSFT was able to recreate the behavior.

I tested in my lab (Exchange 2019 CU9 and Exchange 2019 CU10) and was able to reproduce the problem.
In CU9 it works fine in EAC while in CU10 it cannot save the changes correctly.
And EMS both works fine without any problem.

Also in the discussion in this link, there are other ones who have the same problem.

The link in the last sentence refers to this comment on the Released: June 2021 Quarterly Exchange Updates. A fix is not known to me at this time.

This entry was posted in issue, Software and tagged Exchange, issue, Update. Bookmark the permalink.