In the Microsoft Techcommunity post Released: July 2021 Exchange Server Security Update it is also pointed out that a schema is needed for all measures to take effect. Stefan A.There are some discussions about it onreddit.com. There are also some Known Issues listed in the post.

Issues with ECP and OWA after install

On my first Exchange (2019CU10), in the ECP folder the web.config was empty after the patch. I then dragged it over from the second server.

And blog reader Marcel noticed login issues after the update. Here is his comment on the German blog post:

Have login problems after the update. After installing the Security Update For Exchange Server 2016 CU21 (KB5004779) on an Exchange Server in the DAG, I get the following error:
After successful login, I am immediately thrown back to the OWA login page.
If I deactivate the server on the LB, OWA works as usual!

Also in the Techcommunity post login problems are confirmed – GErman blog reader Marcel has laft his comment there in English. On reddit.com someone also points out problems and in this reddit.com thread there is also a discussion on the topic. 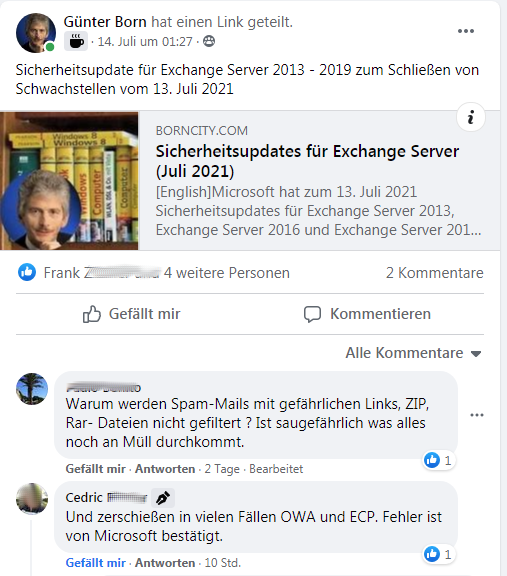 After a German blog reader on Facebook posted the above message about Exchange July 2021 update problems (ECP/OWA), I compiled some details into a separate blog post. Meanwhile, in the Techcommunity post Released: July 2021 Exchange Server Security Update is also a notice that there may be problems.

Expired certificates as cause

Microsoft published its own post Can't sign in to Outlook on the web or EAC if Exchange Server OAuth certificate is expired in May 2021, which addresses the sign-in issues. The error pattern:

When you try to log in to Outlook on the web or the EAC in Exchange Server, the web browser freezes or reports that the redirection limit has been reached. Additionally, event 1003 is logged in the Event Viewer.

Important: It can take up to 2.5 hours after creating the new OAuth certificate until this takes effect. Just keep this in mind in case something does not happen immediately after the new creation.