Microsoft announced the release in the Techcommunity post Released: June 2021 Quarterly Exchange Updates. These updates (CUs) include fixes for customer-reported issues, all previously released security updates, and a new security feature. 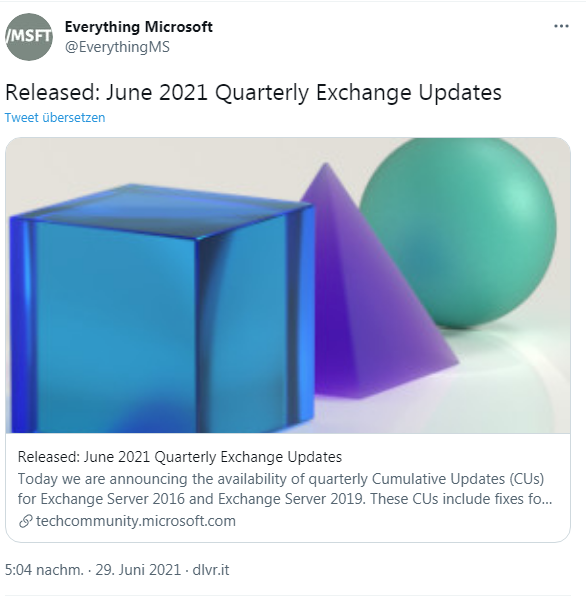 Here are the KB articles that describe the fixes in each release, and the product downloads include:

A full list of fixes is included in the KB article for each CU. These updates include schema and directory changes and therefore require administrators to prepare Active Directory (AD) and all domains (more information is available here). Schema changes can be tracked here. Best practices for a successful installation can be found in this document.

Note: Customers in Exchange hybrid deployments and those using Exchange Online archiving with an on-premises Exchange deployment must deploy a supported CU for the product version being used.

To avoid installation issues, administrators should also ensure that the Windows PowerShell script execution policy is set to "Unrestricted" on the server being updated or installed. To verify the policy settings, run PowerShell's Get-ExecutionPolicy cmdlet on the computer being upgraded. If the policy is NOT set to Unrestricted, use these steps to adjust the settings.

Note: Because some customers are changing the web.config file on their Exchange Server, Microsoft informs that when the June 2021 CUs are installed, a new section will be added to the web.config of each HTTP service under <Module>. The entry will be named "HttpRequestFilteringModule" and must be present for AMSI integration to work .

This entry was posted in Software, Update, Windows and tagged Exchange, Update. Bookmark the permalink.