[German]As expected, Microsoft has released the first Insider Preview of Windows 11 for testers on June 28, 2021. Specifically, it is build 22000.51, which will be rolled out as a 64-bit version in various languages and SKUs for Windows Insiders. To get this build, the machine must officially meet both the minimum requirements and, most importantly, have been added to the Dev Channel of the Microsoft Windows Insider program before June 24, 2021.

The announcement of build 22000.51 for Windows Insiders was made on the Windows blog in this article, as can be seen from the following tweet. 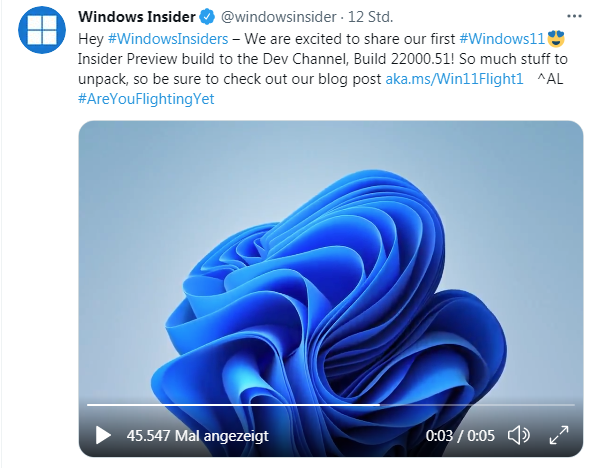 Microsoft has already published the blog post Preparing for Insider Preview Builds of Windows 11 on June 24, 2021, which explains how users get into the Insider Program and what the hardware needs to do in order to test this new build. The whole thing is somehow extremely complex, and should be read in the relevant post if needed.

In the meantime, however, Redmond has partially relaxed the hardware requirements so that this build should also work with 7th generation processors. The blog post Update on Windows 11 minimum system requirements was published on June 28, 2021. There, Microsoft defends the partly very high requirements because they want to increase the security of the operating system.

This night, numerous insiders have complained (see these tweets), whose machines were not able to upgrade to the new Insider Build. Funnily enough, Surface owners are among them. Due to download errors, I was not able to download an executable copy with various tools during. Here I refer to the tweet of Albacore, who link to an ISO file in the meantime.