[German]Microsoft unveiled its "new Windows 11" today, June 24, 2021, as well as the ideas behind it. New design with rounded corner, Microsoft Teams integration, improved gaming, widget for desktop, Android app, a new store, optimized touch, pen and voice controls and some more, are the promised ingredients. Here's an initial overview of what to expect. Well, most of my predictions, given within a few blog posts, were true.

Microsoft has access to a base of over one billion Windows 10 users worldwide. Windows 11, the name now officially confirmed, will be available on new PCs and as a free upgrade for eligible Windows 10 PCs starting in late 2021. An early build will be made available as early as next week (I had heard 6/28, which is Monday) through the Windows Insider program.

The most important new features

The complete presentation with Panos Panay and Satya Nadella can be viewed as a live stream on Microsoft's CH3 channel. Jump to 2:25:15 in the timeline, then Panos Panay begins his presentation, which is then supplemented by individual employees. There, you learn in short sequences, underlaid with video clips, what Microsoft has built in in terms of innovations. From 3:04:30, a short speech by Satya Nadella starts, who emphasizes that Windows 11 should be open and a new platform for everything (all devices, the web and so on). The ability to run Android apps on Windows 11 is also planned.

Below is an overview of the major new features and highlight functions:. I took the screenshots from Microsoft's blog post Introducing Windows 11.

Microsoft promises a modern, but restrained and user-friendly design of the user interface with Windows 11. The statement: From the new start button, to the taskbar, to sounds, fonts and icons, the design of Windows 11 is clear and uncluttered. 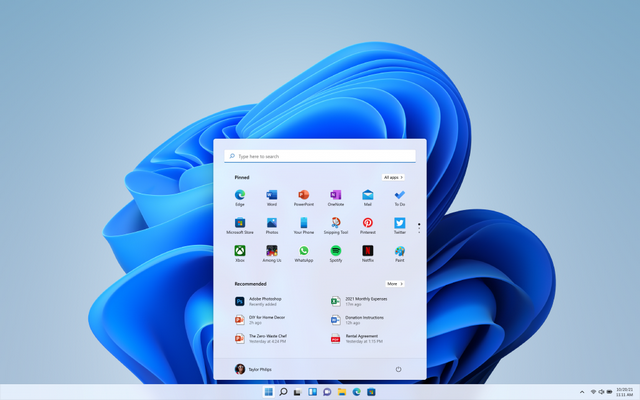 The Start menu is located in the center of the taskbar and uses the cloud and Microsoft 365 to display the most recently used files – even if they were previously opened on an Android or iOS device.

With the new functions "Snap layouts" and "Snap groups", there will be even more possibilities in Windows 11 to place several windows clearly next to and below each other and thus make optimal use of the desktop. A feature called Desktops offers the option to create different desktops for different areas – for example for working, playing or learning.

There is nothing new here to what was already known through the early version of Windows 11 that became public. Microsoft has adopted Sun Valley as the user interface with its round window corners, as well as the borrowings from the discontinued Windows 10X in Windows 11. The centered and redesigned Start menu also shows this. It somehow reminds me of Apple's macOS dock with the app icons arranged centrally at the bottom of the taskbar.

It had long been speculated, now it's confirmed. In Windows 11, Microsoft Teams is integrated directly into the taskbar (Skype will be dropped in the future). Users should be able to contact others directly via chat, text, voice or video from within the operating system. Microsoft promises communication regardless of whether the other person is using a Windows, Android or iOS device. 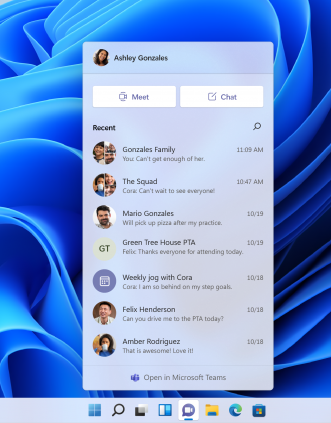 Chat with Microsoft Teams in Windows 11

If the Teams app is not installed on the system of the communication partner, a connection can still be established via two-way SMS – exactly how this happens is currently unclear to me. Teams functions such as mute or screen sharing will be directly accessible via the taskbar in the future.

What I find totally exciting now: When will Microsoft really get one heavy strike from the EU Competition Commission? The somewhat older ones may still remember the browser selection screen that was displayed to Windows users when they first started up. This came about as a result of pressure from the EU Commission, because Microsoft had beaten all other browsers with its Internet Explorer.

And there's another aspect that's bothering me now. When I consider that data protection officers have already had a hard time with Windows 10 and, separately, with the Teams video conferencing solution, classifying it as not compliant with EU GDPR (general data protection rules) – then the question arises: will it be better now if Microsoft combines this stuff into the operating system? The discussions are likely to become even more exciting.

Xbox Game Pass for PC or Ultimate gives gamers access to more than 100 games, with more titles being added on an ongoing basis. More information about the gaming features in Windows 11 can be found on Xbox Wire DACH.

According to Microsoft, the newly introduced widgets allow faster access to information and news with the support of AI and Microsoft Edge. This is a curated news feed directly on the desktop, which offers media such as publishers a new way to play out personalized content. 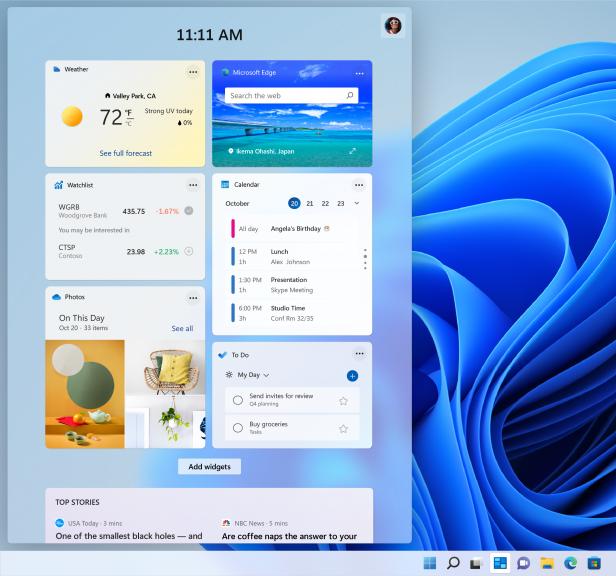 Widgets on the Windows 11 Desktop

When this feature was presented in the live stream, I spontaneously felt reminded of Windows 7 and the gadgets – and somewhat of Android with its widgets. I never really used either, especially when I wanted to work with the operating system. This is aimed at the "post-Facebook generation" who want to have all the information on their desktop at all times, so they can be distracted from their actual work at all times. Let's see if I live long enough to see something like this get stripped of, because it killed peoples productivity.

Microsoft wants the Microsoft Store to continue to be the one-stop shop for apps, games, series and movies. It is promised that the store will have a new, clearer design and will be easier to use. According to Microsoft, the new store offers an even larger selection of apps and should make it easier to search for content via curated collections. Unfortunately, Microsoft did not answer whether quality will prevail over quantity.

Popular Microsoft and third-party apps like Microsoft Teams, Visual Studio, Disney+, Adobe Creative Cloud, Zoom and Canva will soon be available through the Microsoft Store. All apps available in the store will be vetted for security and family-friendliness, Microsoft promises in its blog post.

The big surprise – though it has been rumored from time to time: For the first time, Android apps will be available on Windows later this year. Users can either search for the apps in the Microsoft Store and download them via the Amazon App Store.

Before everything breaks out into a frenzy, I'd like to add a little grain of salt. In my opinion, Microsoft will not be able to implement Google Play Services in Windows 11. All apps that rely on these services will not run on Windows 11, and anyone who has bought an Android app from the Google Play Store will have to pay again for Windows 11. It remains to be seen how well the apps will run later. However, it is an interesting approach – and probably what Satya Nadella meant by "being open for everything".

Microsoft is working on opening up the Microsoft Store even more. Developers and independent software vendors (ISVs) can bring in their apps, whether they're Win32, Progressive Web App (PWA), Universal Windows App (UWP) or built in an app framework. A change in Microsoft's revenue share policy allows developers to receive 100 percent of revenue. The competitive revenue share option of 85/15 percent still remains.

For enterprises: Security and familiar tools

What was exciting for me were the plans regarding Windows 11 for enterprise use. Windows 11 can be planned, prepared and deployed just like a Windows 10 update, Microsoft writes. Familiar management features such as Microsoft Endpoint Manager, Cloud Configuration, Windows Update for Business and Autopilot will still be available to assist with the upgrade to Windows 11.

Like Windows 10, Windows 11 follows the core design principle of app compatibility. App Assure is a free service (and compatibility promise for Windows 10 on ARM64 devices) that helps enterprise customers fix issues with apps so they run smoothly on Windows 11.

Windows 11 has comprehensive security technologies that provide protection from the chip to the cloud. It is a zero-trust-enabled operating system that protects data and access across all devices. We've worked closely with our partners to meet the demands of a dynamic threat landscape and the new, hybrid world of work, and to raise our security baseline accordingly.

However, this also means that Windows 11 requires TPM 2.0 as a prerequisite for installation. Otherwise, 4 GB of RAM and 64 GB of storage are required for the operating system, which is also only offered as a 64-bit version. Support is supposed to run for 24 months in the Home and Pro versions, while 36 months support is granted in corporate environments. In addition, one feature update per year (instead of the previous 6 months) is planned.

It already became clear in the video of the product launch: Windows 11 offers improved touch, pen and voice operation. On tablets without a keyboard, the icons in the taskbar are spaced further apart. Windows can be easily moved or resized. On tablets without a keyboard, Windows 11 can also be operated via gestures. When working with a pen, users receive haptic feedback in the form of vibrations while clicking, sketching or writing. Windows 11 comes with improved voice input; it can automatically punctuate and execute voice commands.

How voice recognition and input is supposed to work practically in an office with many people isn't clear to me. I may be wrong, but spontaneously some things in the live presentation reminded me of the failed Windows 8, like the fade-in of widgets by swiping from the left edge of the screen to the center of the screen.

Availability as a free upgrade and on new PCs

Windows 11 should be available on new PCs and as a free upgrade for eligible Windows 10 PCs from the end of the year. As early as next week, an early build of the new operating system will be released via the Windows Insider program.