[German]Microsoft has published a larger list of requirements that a machine must or should fulfill for the new operating system after the presentation of Windows 11 (see Yes, Microsoft has presented Windows 11). An overview can be found in the article Windows 11: Hardware requirements. However, to check whether a machine meets the requirements for Windows 11, there is a (now updated) PC Health Check tool from Microsoft, as well as the WhyNotWin11 tool, which provides more details.

I did go into detail about the minimum requirements set by Microsoft in the Windows 11: Hardware requirements. Even those who have a Windows 10 machine, and although Microsoft promised a free upgrade, won't always be able to upgrade to Windows 11. The obligation for TPM 1.2 or better 2.0 as well as the hardware requirements may put a spanner in the works. Reliable tools for checking whether a machine is suitable would be just right.

Microsoft had already released its PC Health Check tool on 24 June 2021, directly after the presentation of Windows 11. This MSI installation file can be downloaded from the Windows 10 site (see the "Get ready" section). However, the tool requires Windows 10 version 1803 or higher to be installed. Furthermore, there were some irritations with the first version of the tool regarding its results. 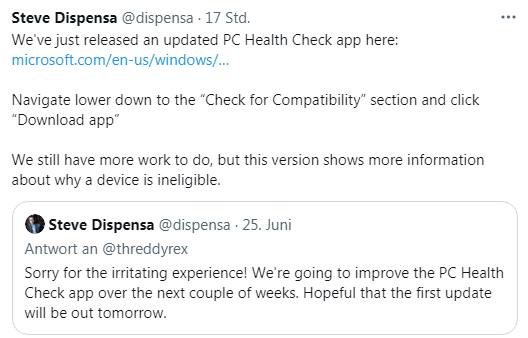 According to the above tweet, Microsoft has revised the PC Health Check tool. I noticed that the app can be installed without administrator rights. A progress bar comes up when you call it up: Preparing to install an update, installing something and that's it. This strange process can be explained by the fact that the old version of the app is still being downloaded. When called, the installed app then loads an update that is supposed to improve detection. 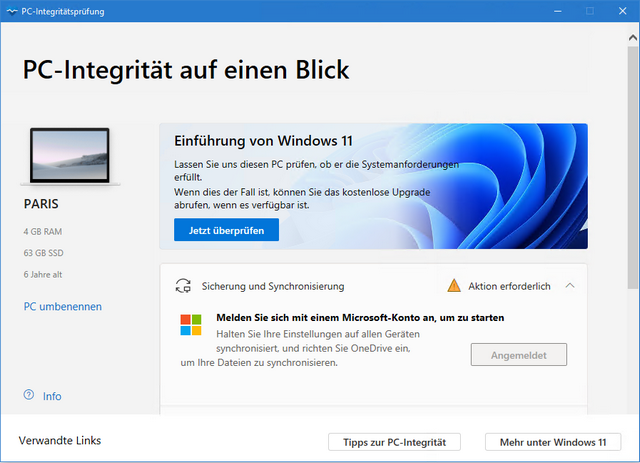 Only after two attempts did the above window eventually come to display, and I ran the check. As expected, the tool reported a short time later with the following dialog box: 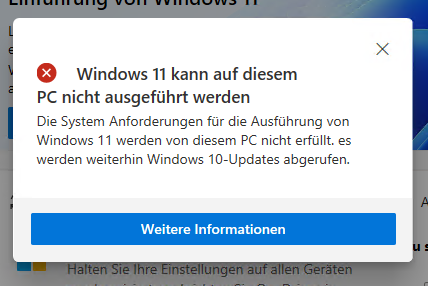 he Windows 10 test system is not compatible with Windows 11 – so tests should be dead as well – I guess. By the way, the More Information button provides zero additional information, but still redirects to Microsoft's Windows 11 advertising page. There I learn that I should buy a new PC …

In the meantime, there is the tool WhyNotWin11 (was also mentioned in this comment already), which can be downloaded from GitHub for free. The tool does not need to be installed, but it does require administrative permissions. I ran it once, and got the following display. 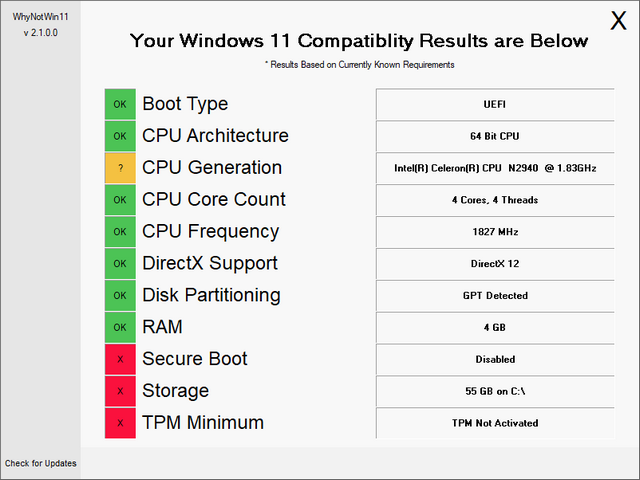 I must say that I like this tool, because it shows where it really hangs. In addition, it can also be run under Windows 7, as I have just discovered. Looks here on the test system and the productive system probably bad – and I'm also still a bad finger, so with Secure Boot disabled and TPM not enabled (or not present on the productive system). A description of the tool can be found on GitHub.

The dark side: False positive alarm

At this point, however, the note: WhyNotWin11 is displayed on Windows Total by three scanners as "malicious" (harmful). Sophos detects it as Generic ML PUA (PUA). Probably comes from the hardware detection. Since the author discloses the source code on Github, anyone could compile the .exe file themselves if necessary. Personally, I consider the tool to be safe from this view and the VirusTotal message may be a "false positives".

Note also, that the tool has DLL hijacking vulnerabilities and a couple of other flaws (see the comment from Stefan Kanthak within my German blog). DLL hijacking means: If a malware places several maliciuous DLLs within the program's folder, they will be loaded with administrative privileges. Dridex and other trojans uses this technique to gain persistent. To mitigate: Copy the tool to an empty folder before execution – and monitor, that no other files are "suddenly be copied magically into that folder". I case, some DLLs are show up, your system is probably infected.

Now I know as much as before and have to wait and see if the Insider Previews can be installed on systems designated as incompatible.