[German]I have been waiting for this for a long time, but now the feared has happened. Since Friday, there has been a massive wave of attacks on unpatched Microsoft Exchange servers via the ProxyShell vulnerability. Huntres has already discovered over 1,900 hacked Exchange servers but which had a shell installed. Meanwhile, CERT-Bund also warns. Here is some information about the state of attack wave.

I became aware of a wave of attacks on unpatched Microsoft Exchange servers running since Friday on Twitter via various sources. CERT-Bund has meanwhile issued the following warning. 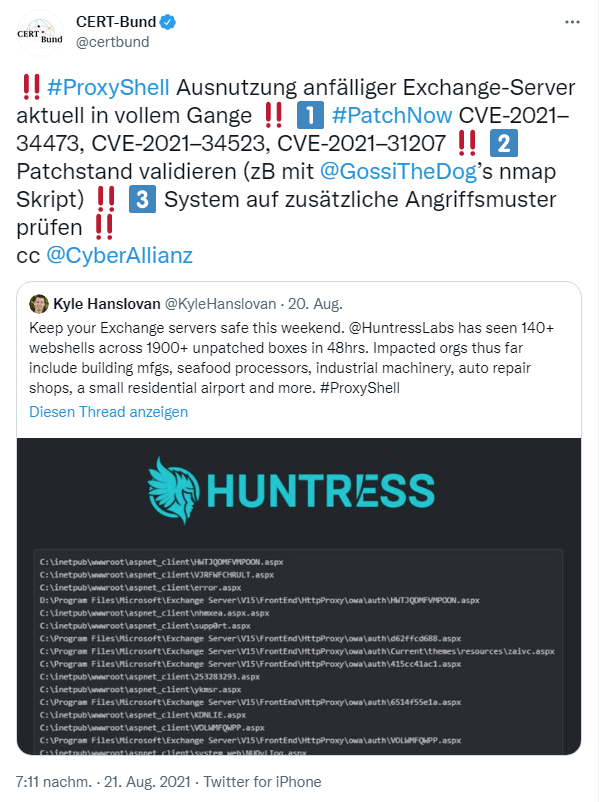 The HuntressLabs of the security vendor in question discovered more than 140 webshells on more than 1900 unpatched machines running Microsoft Exchange within 48 hours. These 140+ webshells were found on Server 2013/2016/2019 versions of on-prem Exchange. It should be noted that most of the webshells are randomly named, but some have recurring patterns. The Exchange servers were infected using the ProxyShell.  Huntress published the blog post Microsoft Exchange Server still vulnerable to ProxyShell Exploit exploit as of August 21, 2021, which is continuously updated. 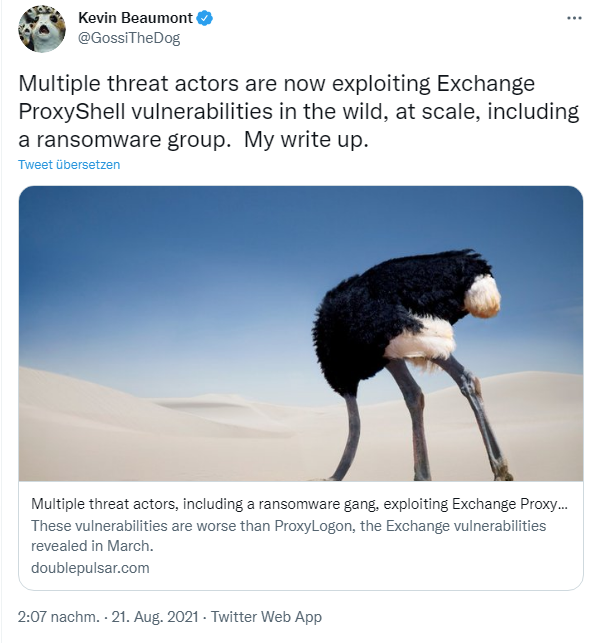 Security researcher Kevin Beaumont published this article on the topic at DoublePulsar (see also above tweet). Other articles can be found at The Record, and Bleeping Computer reports here that the FileLocker ransomware gang is attacking Exchange servers via ProxyShell exploit. Affected businesses include construction companies, fish processing plants, industrial machinery, auto repair shops, a small airport, and more.

Taiwanese security researcher Orange Tsai of the DEVCORE team gave a presentation on Exchange vulnerabilities at BlackHat 2021 in early Augst. He showed how by combining old vulnerabilities (e.g. CVE-2021-34473, CVE-2021-34523 and CVE-2021-31207) that were closed by updates in April 2021, Microsoft Exchange servers can be attacked and taken over via exploits called ProxyLogon, ProxyOracle and ProxyShell.