[German]Microsoft has released its onclick Microsoft Exchange (On-Premises) Mitigation Tool (EOMT) as of March 15, 2021. The tool is intended to provide a one-click solution to mitigate the CVE-2021-26855 chess vulnerability on on-premises Exchange Server installations and is primarily intended for administrators in smaller companies to have something in hand in the first place.

I had already noticed it on Twitter this night from my colleagues at Bleeping Computer – Microsoft featured the tool in this MSRC blog post. 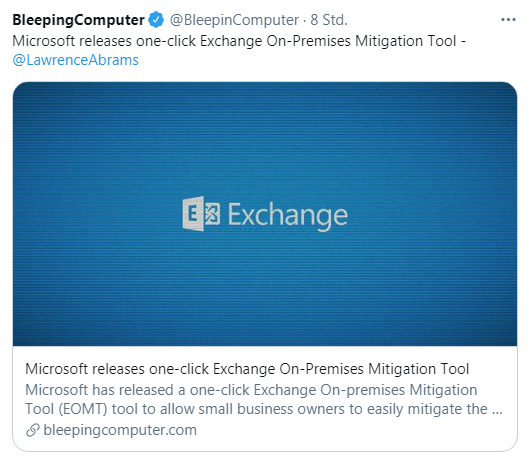 Just over a week after Microsoft closed the four vulnerabilities in its on-premises Exchange servers (see Exchange server 0-day exploits are actively exploited), the Redmond-based company must have realized that administrators from smaller businesses in particular are hopelessly overwhelmed when it comes to quickly patch their on-premises Exchange servers and secure it after an infection. Therefore, the developers have created a “click-and-ready” solution, so to speak, which is supposed to help customers who do not have dedicated security or IT teams immediately to apply the provided security updates. EOMT is designed to do the following:

The Microsoft Exchange On-Premises Mitigation Tool (EOMT) has been tested by Microsoft with Exchange Server 2013-, 2016- and 2019. It is important to understand that this new tool is intended only as an interim measure for customers who are unfamiliar with the patch/update process or who have not yet applied the On-Premises Exchange Security Update.

The Microsoft Exchange On-Premises Mitigation Tool (EOMT) is available for free download as a PowerShell module from Microsoft on this Github page. Microsoft recommends running this script instead of the older PoweShell script ExchangeMitigations.ps1, which is also provided. The Exchange On-premises Mitigation Tool automatically downloads all dependencies and runs the Microsoft Safety Scanner. EOMT.ps1 is fully automated and uses known, previously documented remediation methods. This script performs three operations: 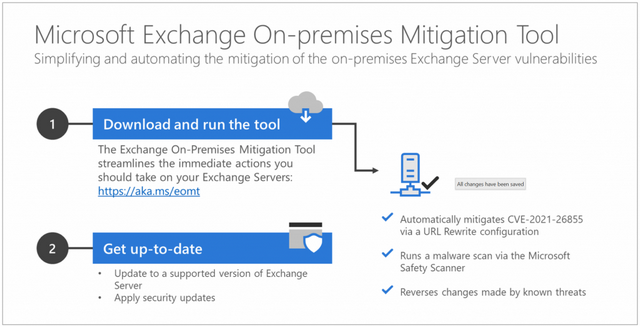 This is a better approach for Exchange deployments with Internet access and for customers who want or need a quick approach to automatically remediate the vulnerabilities and possibly isolate an infection – and don’t have access to experts to scan the installation on short notice. Developers have not observed any impact to Exchange Server functionality from these mitigation methods, nor do these mitigation methods make any direct changes that disable Exchange functionality.

An external Internet connection from your Exchange server is required, as it is necessary for downloading the Microsoft Safety Scanner and the IIS URL Rewrite module. The PowerShell script must be run as administrator.

At this point, I am personally highly divided. Of course, it’s good to have a “one-click” solution to scan an Exchange server, remove any infection found, and then harden the installation as well. However, Microsoft writes that this is effectively the first shot, and that this does not replace patching. The responsible parties must then check the Exchange Server for updates and security. There are also questions of principle.

For problem 4 in particular, it is imperative to bring in expertise to review the Exchange Server in the aftermath. In the blog post ProxyLogon hack: Administrator’s Repository for affected Exchange systems I have summarized what relevant information is available.

The background: The Exchange mass hack

here were four critical vulnerabilities in Microsoft’s Exchange servers that were not closed until March 2/3, 2021, by an unscheduled security update (see Exchange server 0-day exploits are actively exploited). The problem is that since January 2021 there have been attacks on Exchange servers that were accessible via the Internet using port 443. Then, since the end of February and then the beginning of March 2021, there have been mass scans of Exchange servers by an attacker group called Hafnium. It can be assumed that all unpatched (and many patched) Exchange Server on-premises installations are compromised. I’ve covered this topic in several blog posts linked below.

This entry was posted in Security, Software, Windows and tagged Exchange, Security, Tool. Bookmark the permalink.