[German]Microsoft addresses with update KB3206632 (12/13/2016) also the DHCP issue forcing many Windows 10 Version 1607 machines into a “no internet connection due to a missing IP address”. I’ve had a machine facing this error, and I took the opportunity to document as much as possible. Here is my “compressed” English version.

If a user runs the network trouble shooter, it ends with the message, that the issue could not be fixed, due to a non valid IP address. The Windows 10 V1607 client wasn’t able to obtain a valid IP address from DHCP server. 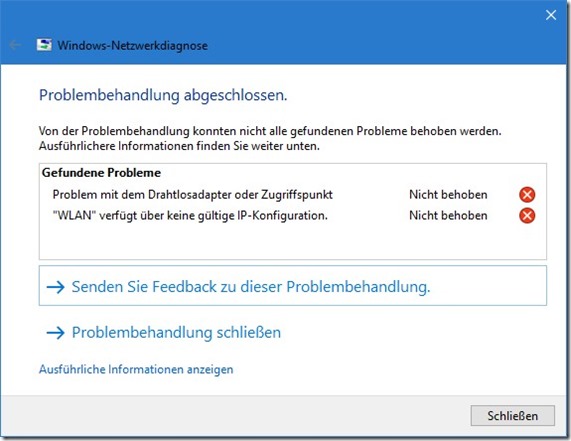 My first impression was, “it has something to do with update KB3201845”, because I read about that issue shortly after this update has been released. I blogged about that issue (KB3201845 hebt Windows 10 Version 1607 auf Build 14393.479–kappt Internetzugang? only German) and published some solutions to fix – according to Microsoft, a simple restart should fix it.

Microsoft addressed the issue in KB3206632

Addressed a service crash in CDPSVC that in some situations could lead to the machine not being able to acquire an IP address.

A reader of my German blog pointed out within a comment, that the “missing / invalid IP address issue” has been addressed. Till now I haven’t read more details about the root cause for the DHCP issue. But I have had a machine with this error and took the opportunity to investigate some things.

Service crashing was the root cause, I supposed

It was clear, that an invalid IP address (not obtainable from DHCP server) was the root cause. The client used an IP address assigned via APIPA, and a restart fixed this issue Also at Askwoody is an addendum, mention, that the error may occurs minutes after returning from hibernation. I’ve documented some insights within my older German blog post Windows 10: Neues zum “keine gültige IP-Konfiguration”-Bug. I found, that some services crashed shortly after returning from hibernation. Here is, what I wrote within my German blog post:

Then I got immediately an error, that restarting the service “Netzwerkspeicher-Schnittstellendienst” has been failed (see screenshot).

The mess started with a crashing CDPSvc service, then other services are also stalled. I could not found dependencies, so I first thought, it’s just coincidence.

Now I read about a fix for Connected Devices Platform Service (CDPSvc) addressed in KB3206632. So I booted my affected client and have had another view into the events. Unfortunately older entries at Windows protocols – System and Installation has been overwritten.

But I know the date and time of the issue, so I was able, to find a log entry within Application branch (see screenshot above and below).

If I not completely wrong, the event deals with a crashing Connected Devices Platform Service (CDPSvc) reporting error 0xC0000409 in ucrtbase.dll. The module is an universal runtime library for C (see). Using my blog post How to decode Windows errors? I found more details:

Error 0xC0000409 stands for STATUS_STACK_BUFFER_OVERRUN,  the system detected an overrun of a stack-based buffer in this application. This overrun could potentially allow amalicious user to gain control of this application. (see)

So, at the end of the day, a simple stack overflow is causing a “missing internet connection” in Windows 10 Version 1607. Let’s hope, Microsoft has fixed the root cause of this error. At the end of the day, it’s not clear to me, what the root cause was. But it’s the best explanation tracked down I found till yet. Maybe some of my blog readers are having more insights and left a comment. A good recommendation is, to disable the “fast boot” on Windows 10, to avoid such issues in the future.