[German]Raspberry Pi-Foundation just announced a new model of its single board computer Raspberry Pi. And the sensation: The Raspberry Pi 2 model B will also be Windows 10 capable.

Raspberry Pi 2 Model B in brief

The board of a Raspberry Pi 2 Modell B contains a new Broadcom BCM2836 900MHz Quad-Core SOC-CPU and 1 GB RAM. According to The Register this will make the board 6 times faster (in some benchmarks) as the predecessort Raspberry Pi Modell B+. 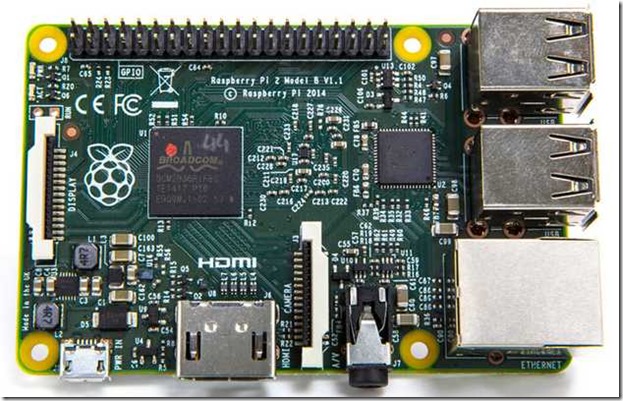 The BCM2836-SoC is similar to its predecessor ARMv6-kompatiblen BCM2835, used in previous Raspberry Pi B+. But the new SoC comes with Quad-Core, running with 900 MHz. And the board has now 1 GByte RAM. All other specs are identical to Raspberry Pi B+: HDMI output, 4 USB 2.0 ports, a 10/100 MBit LAN-RJ-45 outlet, a MicroSD card slot, a CSI camera port and DSI display ports.

I was aware, that Ubuntu for ARM was available as OS for this single board computer. The biggest surprise for me comes with the announcement, that Windows 10 will run on Raspberry Pi 2. First I came across this article published by Microsoftie Scott Hanselman. Scott wrote:

Not only did the Raspberry Pi Foundation announce the Raspberry Pi 2, but it seems that Windows 10 will support Raspberry Pi 2 and we can get it free for the Maker community through the Windows Developer Program for IoT coming later this year. Last year Microsoft announced the Windows Developer Program for IoT and put Windows on the Intel Galileo board. Today Windows gets even better for IoT and Maker scenarios by supporting makers on RPi2.

Also geek.com wrote within this article, that Raspberry Pi-Foundation und Microsoft has worked 6 months together, to assure compatibility with Windows 10. Developers may register on this Microsoft web site as a Windows IoT developer to get their hands on Windows IoT. That’s great, at least. Or what’s your opinion.

This entry was posted in computer, Windows and tagged Internet of Things, Raspberry Pi, Windows 10, Windows IoT. Bookmark the permalink.