Some People updating a Windows 8.1 tablet pc or hybrid-device with touchscreen will be confronted with a negative surprise: The On-screen keyboard doesn't popup anymore, if the user select an input box in tablet mode. I've had this situation on a hybrid device (Medion Akoya P2214T) and will show, how I've fixed it. The solution should work for all devices with a eGalax touchscreen

Microsoft has changed several things in Windows 10 Tablet mode. Therefore I don't mind, after I noticed, that the On-screen keyboard doesn't show automatically after I hit an input box within an app. I also received comments from Surface Pro 3 owners, claiming that the On-Screen keyboard didn't show every time after hitting an input box. On my test machine, I was able to use the taskbar's icon to show the the On-screen keyboard (see screenshot from my German Windows below).

In German Microsoft Answers forum I found several users blaming Windows 10 not to show On-screen keyboard automatically. A Lenovo Yoga tablet pc user mentioned, that in his case a  Yoga Transition software from Lenovo was a show stopper. But I don't have had a Lenovo device. So I decided to post this issue in Microsoft's internal Windows 10 influencer forum. My MVP colleague Barb Bowman mentioned, that the behavior of the On-screen keyboard may be changed within settings, and posted this settings screenshot.

My first thought was "hell, was I stupid", but investigating my Typing settings page showed only Spelling options – nothing for touchscreen.

This brought me to the conclusion, that something went terrible wrong on my machine. I digged a bit a around, but was not able to find a quick solution. Time for a deeper investigation.

First I decided to press key combination Windows+X and select Device manager in quick launch menu. Then I inspected the devices within device manager. There are two entries for input devices: Human Interface Devices and Mice and other pointing devices.

In a German forum thread somebody mentioned, that on his Medion P2214T a eGalax Touch Controller c 030 was shown under Mice and other pointing devices. Below is a screenshot of the driver properties (still in German). 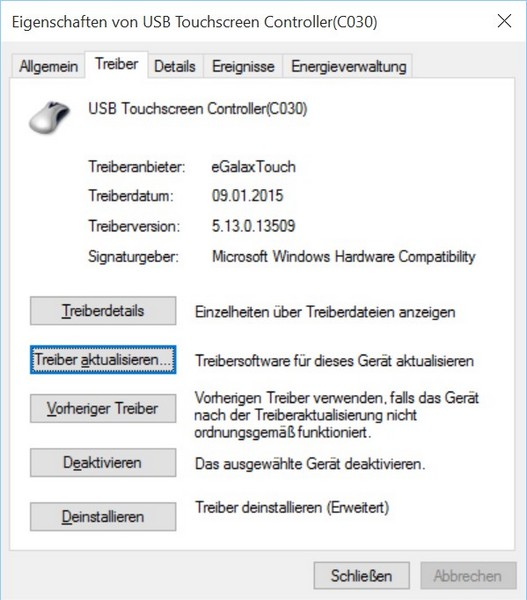 So the issue was clear: the driver was detected wrongly as a mice device and Windows 10 identified it as a mouse. Searching the web for eGalax C030 showed my several hits (beside a driver page, I found users of several Tablet PCs with issues, here HP Envy TS15, here ASUS und HP Envy TS15, here and here). Some users mentioned, that reverting back to the previous driver has solved their issue in Windows 10. But I haven't this option – after "switching to the old driver", the driver was gone. Unfortunately, my test machine was a pre series device withouth a driver partition. I tried this driver, but without success. The touchscreen was still recognized as a mice device.

On reader of my German blog mentioned, that the touchscreen on his slate was identified as a HID-compliant touch screen.

Using the hint given above, first I found this TOUCHPANEL INSTALLATION FIX package provided by Lenovo German subsidiary Medion. The package provides a batch file, that removes the mice device driver for eGalax touchpad and reinstall a HID-compliant touch screen driver. Also I found this eGalax web site, providing a patch tool to fix the driver issue. This solution should fix the issue on all machines, using a eGalax USB touchscreen. After executing the fix solution, as "Run as administrator", the USB eGalax C030 mouse driver was uninstalled via RemovexTouch.exe.

Checking my device manager after applying this fix showed me a  HID-compliant touch screen entry. Then I used the Action Center to switch to Tablet mode (tile Tablet mode as shown below) and rebooted Windows 10. 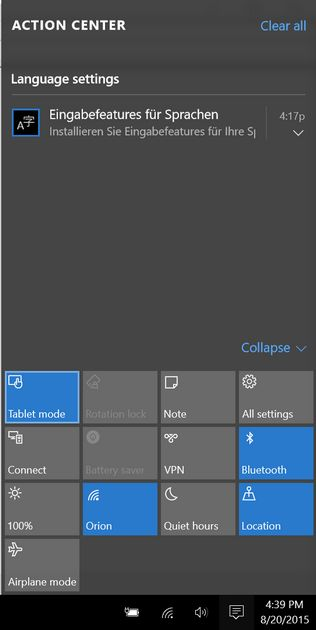 Afterward the issue was solved. My touchscreen was identified properly, and Windows 10 invokes On-screen keyboard automatically, if I type into an App's input box. Also my settings Typing page shows now the required options.

I hope, the explanations given above may help to fix also touchscreen issues on other devices. Comments are always welcome.

This entry was posted in Windows and tagged Touchscreen, Troubleshooting, Windows 10. Bookmark the permalink.