[German]Some users of Microsoft Windows 10 are receiving an error 0x80080204 during downloading apps from Microsoft Store. Here are a few background information and an explanation for a case in Windows Fall Creators Update.

Trying to download an app from Microsoft Store ends in some cases with error code  0x80080204. Then the app can't be installed. 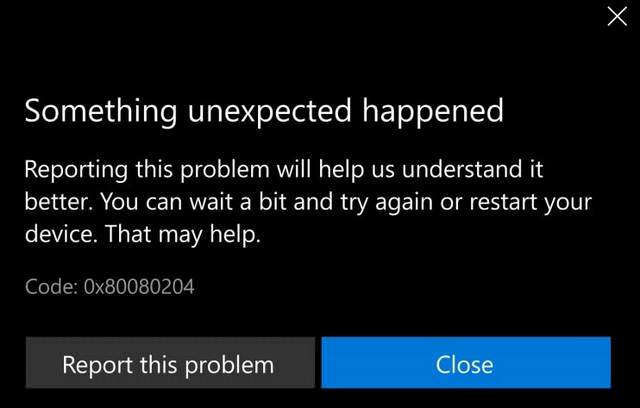 Somewhere I read, that some user has identified the reason for the error code in a bad SD card in his Lumia under Windows 10 Mobile. However, since most users don't use a SD card on the desktop systems to store apps, it could be not the general root cause. Therefore it would be helpful to have a more details, what the error code 0x80080204 stands for.

Searching my error code lists did not result in an explation – the error code wasn't found in the usual error lists. You have to go into the files with the error definitions of the Windows SDK to find hints if necessary. I still didn't install an SDK on my computer – but when searching the internet I found this forum post on Windows 8 from 2012, where André Ziegler (who also posts within my German blog) mentioned the details.

The manifest used within the appx package is damaged. André linked to this MSDN article explaining some details of an app. The solution can be (in some cases) to uninstall and reinstall the app from Microsoft Store.

After release of Windows 10 Fall Creators Update it seems that some apps are affected by this error. For Windows 10 Mobile V1709 there is a thread in Dropbox forum, where a user mentions this issue.

I then uninstalled DropBox.
A new install now results in the same error 0x80080204.

This is a case, where reinstalling an app wont' fix the issue. MVP Rudy Huyn, who is a developer, posted his findings for the special case. He received feedback and one star reviews for one of his apps, where users are claiming, that this app could not be downloaded from Microsoft Store, as he wrote within his blog. Rudy Huyn found the reason for this behavior. It's a combination of Visual Studio 2017 and Windows 10 Fall Creator Update SDK. His explanation:

If your application contains a background audio agent, each time you edit your AppxManifest via the App Manifest Designer (the default viewer of this type of file) when you change the version number of your app (when you create a package for example), the appxmanifest becomes corrupted.

This is also the explanation, why a re-install didn't fix the issue (because the app is broken in store). I could not help, but my impression is, that since Microsoft is forcing Store apps, the amount of errors (compared to Win32 applications) is rising. (via Windows Latest, via)

This entry was posted in issue, Windows and tagged error 0x80080204, Store, Windows 10. Bookmark the permalink.