blog reader Sebastian noticed that the updates are offered again at WSUS, so he left a comment.

But nothing has changed in the KB article? Bugs still present.

Who has the latest information?

I then checked the Microsoft Update Catalog and found the Windows Update KB4090450 with release date April 4, 2018. 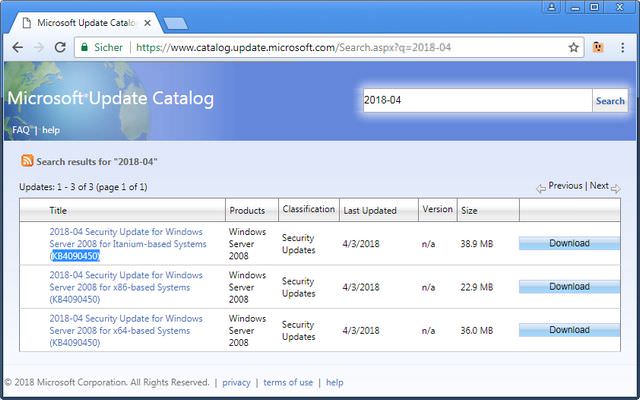 The updates are described in the following KB articles at Microsoft, and the revision date has been adjusted. I once compared my old descriptions with the current KB articles on the updates as well as old versions by wayback machine. The following seems to have changed – hope I haven’t overlooked anything.

Update KB4090450 (Description of the security update for the speculative execution side-channel vulnerabilities in Windows Server 2008: March 13, 2018) article has been revised on April 3, 2018.

I haven’t found any details of what has been revised here. However, since this is a Spectre V2 patch, it could be that the microcode has been updated for additional CPUs.

Important Please apply KB4100480 immediately after applying this update. KB4100480 resolves an elevation of privilege vulnerability in the Windows Kernel for the 64-Bit (x64) version of Windows. This vulnerability is documented in CVE-2018-1038.

And there is an extension within the known issues section:

After you install this update, you may receive a Stop error message that resembles the following when you log off the computer:

Spectre and Meltdown protections for 32-Bit (x86) and 64-Bit (x64) versions of Windows, except the KB4078130 update that was offered to disable mitigation against Spectre Variant 2.

and the kb article has been revised on April 5, 2018. Microsoft added the section dealing with the SESSION_HAS_VALID_POOL_ON_EXIT bug (see previous section above). Maybe some micro codes has been updated.

Important Please apply KB4100480 immediately after applying this update. KB4100480 resolves an elevation of privilege vulnerability in the Windows Kernel for the 64-Bit (x64) version of Windows. This vulnerability is documented in CVE-2018-1038.

askwoody.com also has this article mentions also some update revisions.

Just stumbled uppon this tweet from Alex Ionescu, that mentions a bug on all Windows versions causing a blue screen (BSOD).

Six months ago I submitted an unprivileged local DoS (BSOD) in all versions of Windows. It was closed as “Won’t fix” and marked that it would be looked into for vNext. I kept the tweetable PoC to myself. The next release is RTM and still has the bug. The fix is a one line change.

Dedicated to all happy Windows 10 users upgrading to Windows 10 Spring Creators Update, V1803: Glad, the bug is still there.